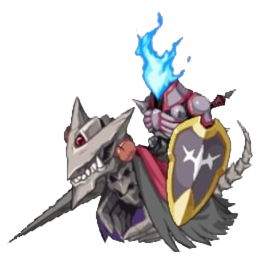 Horsemen are knights who can ride Bone Dragons. They are skilled in the art of swords, and can demolish anything with one swing. They are feared by other monster races. They are chivalrous in combat, which is rare for demons. They get along well with Samurais.”

Attack Potency: Galaxy level (Should be stronger then the Flora Beast who can do this) | Universe level (Equal to demons that can make a big bang by just punching) | Multiverse level+ (Can damage characters like Killia)

Range: Extended melee to interplanetary with melee attacks. Galactic with spells and projectiles | Universal with big bang and magic | Multiversal+ with spells

Retrieved from "https://vsbattles.fandom.com/wiki/Horsemen_(Disgaea)?oldid=5916376"
Community content is available under CC-BY-SA unless otherwise noted.