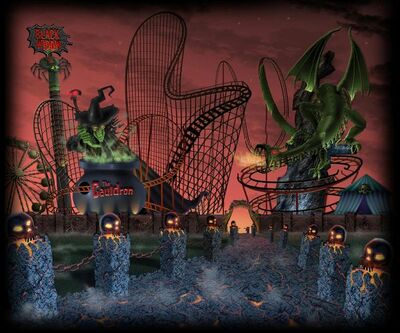 Horrorland is a theme park mainly inhabited by monsters but is open to the public for humans to come in and go on all the attractions that can kill them. It appears in multiple books from the Goosebumps series and had a two parter episode and is widely considered the first landmark of the Goosebumps verse.

Tier: Variable (Lowest being 9-C, highest shown to be 9-A) with monsters, Unknown with technology

The Kardashev Scale: Type I

Territory: Somewhere in the USA

Technology/Abilities: Most residents possess Superhuman Physical Characteristics, Immortality (Mostly type 7. This is mostly for creatures such as ghosts, zombies, mummies and vampires), Non-Corporeal (Shadow People, Ghosts and various data base monsters), Natural Weaponry (Teeth, Claws and Horns), Body Control (Can generate tendrils), Magic (Such as Teleportation, Mind Reading and Invisibility), Enhanced Senses, Underwater Breathing (Type 1 and 2, Have creatures that can breathe in water and out of the water including swamp monsters and Gill-men), Flight/Levitation (The vampires from vampire village, Ghosts and bat-like humanoids), and many more. With technology they possess Spatial Manipulation (Created a infinite slide), Reality Warping (Made rooms that create themselves), Teleportation (Created dolls and tickets that teleport the user back to horrorland), Animal Manipulation (Made coffins that can make bugs appear), Transmutation (Can turn others into werewolves digitally. Made masks that can turn the user into whatever the mask is representing ranging from killer klowns to swamp monsters. Horrors have disguises that can turn them into humans to a molecular level. Created a strange purple liquid that turns humans into horrors), Biological Manipulation (A type of monster called BIAJOLS that can turn humans into brains in jars that have spider legs. Have stamps that will later on grow purple tendrils and attack the wearer), Clairvoyance (Created a fortune telling dummy that can actually predict the future), Illusion Creation, Weather Manipulation (Can create storms and clouds to cover up places like Vampire Village), Mind Manipulation (Have jewelry that can hypnotize others), Energy Projection (Can create lasers), Magic (Some items of Horrorland have magical properties. Such as a wolf tooth necklace that can grant wishes), Technology Manipulation (Has devices that can corrupt human technology), Size Manipulation with Monster Blood

Attack Potency: Variable, Lowest being Street level (Contains monsters that can break bones and overpower humans easily), highest being Small Building level (Slappy can harm Snappy who survived being thrown at a propane tank and the explosion that destroyed most of a garage. Curly scales to Slappy. Baby Horrors can harm Slappy), Unknown (Their technology doesn't focus on destructive capability)

Industrial Capacity: Hundreds of monsters and aliens come to horrorland thanks to the cosmic monster attractor

Military Prowess: Millions of monsters with varying powers and strengths