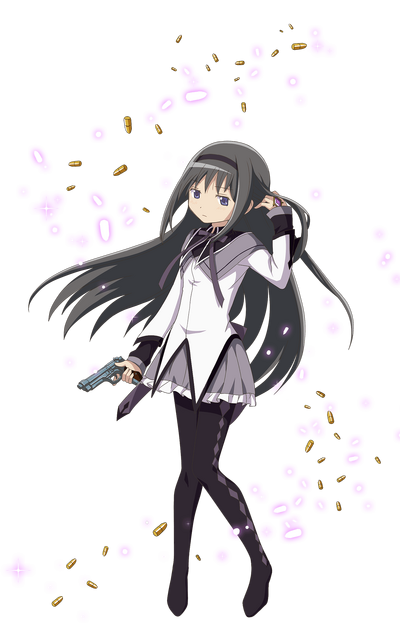 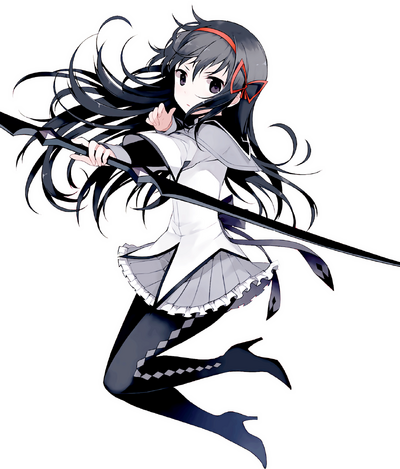 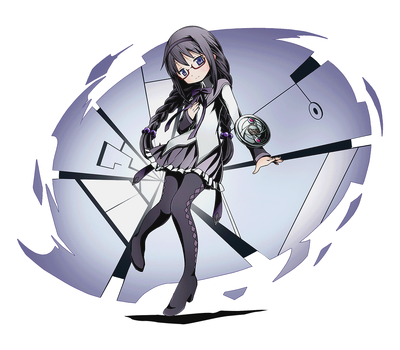 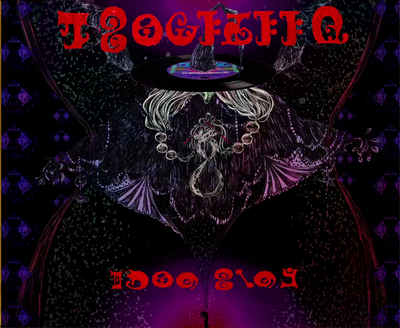 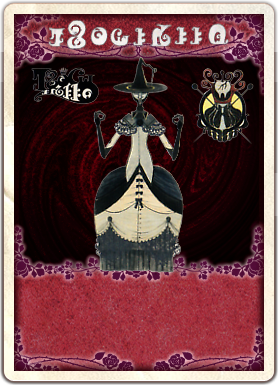 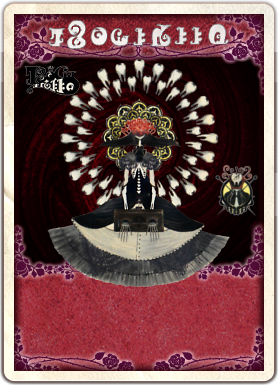 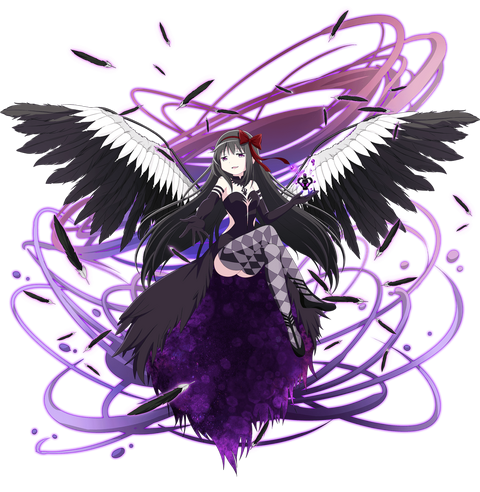 Homura Akemi (暁美 ほむら, Akemi Homura) is a main character in the main series, and the leading protagonist in Wraith Arc and Rebellion. In the main series, she travels through time repeatedly (Approaching 100 times actually) to help save Madoka Kaname from becoming a magical girl and the curses that come with it, however, ultimately each and every time.

Powers and Abilities: Superhuman Physical Characteristics, Immortality (Types 2, 6, and 7), Healing (Mid-level, scaling from Corbeau. Restored her skull after shooting herself in the head during the events of Rebellion.), Self-Sustenance (Types 1, 2, and 3), Magic, Weapon Mastery, Telepathy, Transformation, Telekinesis, Weapon Creation, Extrasensory Perception, Power Modification (Can enhance the ability of her own weapons in the midst of combat, has made non-lethal M84 stun grenades strong enough to even one-shot Oktavia.), Energy Projection, Reactive Power Level (Becomes stronger when critically damaged.), Power Bestowal, and Fusionism. Resistance to Magic, Life Absorption, Status Effect Inducement, and Mind Manipulation, Unconventional Soul Manipulation Resistance. Firearm and Missiles Mastery, Time Manipulation, minor Causality Manipulation (Every time she rewinds time, she has a slight effect on causality according to Ultimate Madoka, over time this can have an impact), Technology Manipulation and Explosion Manipulation (Can control machinery from a distance or through touch, such as trucks and missile launchers), Forcefield Creation (Created forcefields in her battle against Walpurgisnacht), BFR and Portal Creation (Through sending people and objects to her shield's pocket universe.), Acausality (Type 1 through contact with her shield. Kept her memories after the reset of the multiverse), and Teleportation Via Space Leap | All previous abilities from her first tab other than Time Manipulation, Time Stop, and Time Travel abilities, (Though in Wraith Arc, she does eventually regain them and lose them again), Acausality (Type 4. Transcended the laws of the world), Memory Manipulation, Can pierce through Barriers with her Magical Arrows, advanced BFR, Corrosion Inducement with her Black Wings of Corrosion, and unconventional Resistance to Power Absorption (Her power will either control the people who attempt to or manifest itself as a separate being) | All previous abilities from the Wraith Arc and her first key but enhanced, Familiar Summoning, Reality Warping (Also counts as Spatial Manipulation), Mind Manipulation, Absorption, Invisibility, Pocket Reality Manipulation, Curse Manipulation, Immortality (Type 8 when inside her labyrinth [Depends on the labyrinth's existence]), Self-Resurrection (Only effective admist massive amounts of despair), Inorganic Physiology, Blood Manipulation (Can also make copies of her magical girl and early timeline forms, albeit it is unknown if they can fight), Fire Manipulation (Set several blimps on fire upon discovering she is a witch) | All previous abilities, but enhanced, Immortality (Type 3), Soul Manipulation Immunity (Lacks a soul), Non-Physical Interaction, Higher-Dimensional Existence, Concept Alteration (Type 2), Higher-Dimensional Manipulation, Size Manipulation, Law Manipulation (Can also be used as Power Nullification), Non-Corporeal, Abstract Existence (Type 1, likely the same as Madoka Kaname)

Attack Potency: Small Town level physically (Has an attack power rating of 0, was able to stun Sayaka Miki with a kick.), At least City level with weapons (Managed to one shot Patricia with an amped grenade in an early timeline and also destroyed Oktavia in another) | Unknown (Without using on her amplified military equipment and potentially different stats, it is unknown how strong this Homura can be) | City level (Created an entire city in her soul gem and its outskirts, said city would be destroyed if Homulilly is killed) | Multiverse level+ (Poses a threat to even Goddess Madoka and stated to be equal to her in an interview. Implied that she would be able to destroy the multiverse if she wanted to)

Speed: Massively Hypersonic (Caught a bullet with a ribbon within a small time interval at Mach 619) | Unknown, likely Massively Hypersonic (Should at least be as fast as her normal self prior to Madoka's final wish), Possibly Higher | Higher to an unknown extent | Omnipresent (Equal to Ultimate Madoka)

Durability: Town level (Is ranked as a 1 in durability in the tiering system), Higher for her Soul Gem (Soul Gems tend to be the most durable part of a magical girl, as their purpose is to provide a safe, compact 'body' for magical girls according to Kyubey.) At most Island level with her Forcefield Creation (Was able to tank only one attack from Walpurgisnacht before being broken) | Unknown | Likely City level, Unknown with barrier (Was able to resist Madoka Kaname's arrows) | Multiverse level+ (Note that conventional means i.e. the destruction of her body, will not be able to kill her)

Stamina: Very High as a magical girl (Set up lines of Rocket launchers covering an entire sidewalk, placed Cruise Missiles underwater, and kilometers of c4 in a single time-stop.) She will become a witch if her soul gem is fully corrupted | At least Very High, upon reaching maximum corruption she will fade away from the world and become a part of Ultimate Madoka | Likely limitless as a witch or in her Devil form

Range: The soul gem can only possess the magical girl's body up to 100 meters away. A few meters with Energy Projection, Interdimensional with Extrasensory Perception (All magical girls can detect witches location from outside of their barriers), Tens of kilometers with Preparation or Time Stop | Nearby Surroundings | Interdimensional, possibly Multiversal+ (Every witches are capable affecting people outside of their own labyrinth, which located on different dimension from the real World. Homulilly's variation can affects people outside of her Labyrinth despite it being located inside of the Isolation Zone where even Ultimate Madoka cannot enter) | At least Multiversal+ (Equal to Ultimate Madoka), with an At least Universal Barrier

Intelligence: Very High (Has fought against enemies like Walpurgisnacht hundreds of time despite extremely inferior stats, fought against veterans like Mami Tomoe at one point), Genius with Preparation (Studies her enemies to the point that she was able to calculate the likeliest position Walpurgis Nacht would appear in from previous timelines, found out Kyubey's true name, and Walpurgis' past appearances) | Very High, Genius with Preparation (Is the same as before, now has experience fighting against more enemies, primarily the Wraiths) | Same | Nigh-Omniscient as Akuma Homura (Gained all of Goddess Madoka's powers, including the factors that made her nigh-omniscient)

Weaknesses: Homura is protective of Madoka to a fault and tends to be insane, however, this should not come up in a battle as Madoka would not be present. Destroying her Soul Gem would kill her immediately | Same as before. Is now suffering from a psychological breakdown given she can't tell if Madoka Kaname was real or if all the events of the anime were, in fact, false memories she gave herself. She eventually overcomes this, however | None of the previous weaknesses. She was initially unaware that she was a witch | None Notable

Note: Unlike normal magical girls, Homura uses amplified military weaponry instead of her own natural magic as a weapon, thus she is capable of At least City level destruction despite having an Attack Stat of 0 (Small Town level).

Lotte is Homulilly's primary type of familiars. There are also brocken types, which are generally bigger than most office buildings.

Homulilly's superior familiars (Each rivaling a magical girl), they are known as the Clara Dolls, each symbolizing one of Homura's traits.
Add a photo to this gallery