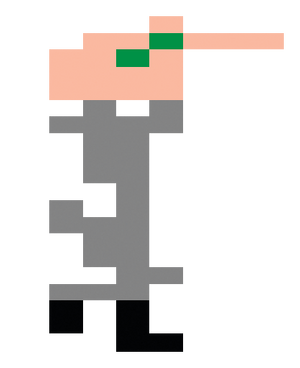 The Homicidal Maniac is the main antagonist of the Atari 2600 game, Halloween based on the film of the same name.

Name: Homicidal Maniac, The Killer, Michael Myers (Though it is never outright stated)

Powers and Abilities: Superhuman Physical Strength and Durability, Knife Mastery, Stealth Mastery, possibly Enhanced Senses (Functions unabated during blackouts), Teleportation (Can seemingly appear and disappear to different locations around the house. This, however, could be a form of game mechanics), and Regeneration (Mid-Low; Seems to show no lasting effects from stab wounds)

Speed: Below Average Human normally (Usually is walking so incredibly slow that he can't catch the Baby Sitter unless she directly attacks him. Is outrun by children, although this is when they are being helped by the Babysitter), Athletic Human when running (Is somewhat faster than the Baby Sitter; Only runs when retreating)

Durability: Street level (Can survive multiple knife wounds, though he does run away)

Weaknesses: Besides being slow, he only chooses to run when retreating.