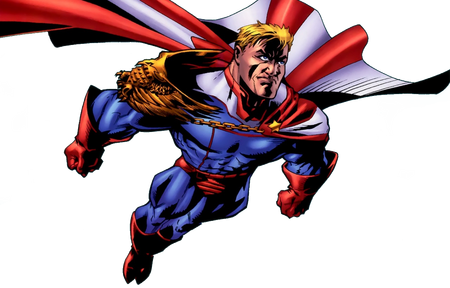 Homelander is said to have been an alien baby discovered in a prairie after crash-landing who aged rapidly before becoming leader of a superhero team, The Seven, as the strongest and greatest superhero in the world.

In reality, Homelander, along with every other superhero, is the product of an experiment with refined Compound V, a chemical developed by Nazi Germany used to grant superhuman powers, by the Vought-American corporation to create a team of superheroes for merchandising profit. Also like the other "heroes" (but worse), beneath his public heroic facade he is a highly depraved, corrupt, immoral, arrogant, sociopathic bully due to a combination of the chemical's side effects and his childhood in an isolated militaristic silo.

He is allegedly responsible for the sexual assault and death (from subsequent complications) of Becky Butcher, wife of Billy Butcher, the leader of a power-patrolling CIA black ops team known as "the Boys", putting him at the top of Billy's extensive superhuman hit list.

Attack Potency: Large Town level (superior to Stormfront, who can create hurricanes to destroy portions of land in Africa and Indonesia. Injured Black Noir, a clone of himself)

Speed: Supersonic+ (Comparable to A-Train, who can run at mach 3, and Stormfront, who can fly fast enough to cause sonic booms. Quickly flew from New York City to Washington, D.C.)

Lifting Strength: Class 50 (tossed a jet with one arm, immensely superior to 1940's superheroes, two of which lifted a 36 ton tank)

Durability: Large Town level, likely higher (even as a child, a hydrogen bomb was the only weapon that could threaten him, and as an adult a nuke would be needed to kill him)

Range: Dozens of meters (reduced a platoon to a puddle of blood large enough to cover an entire hangar), higher with heat vision

Intelligence: A cunning and deceptive manipulator.

Weaknesses: Insane, psychopathic, his attention is divided while using his enhanced senses.