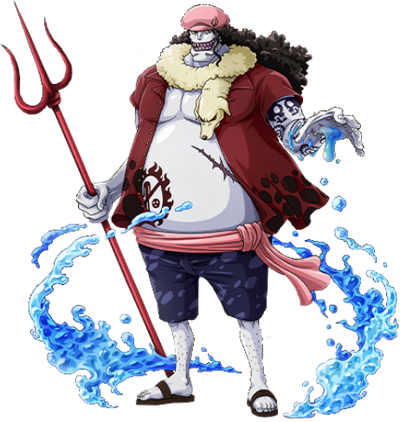 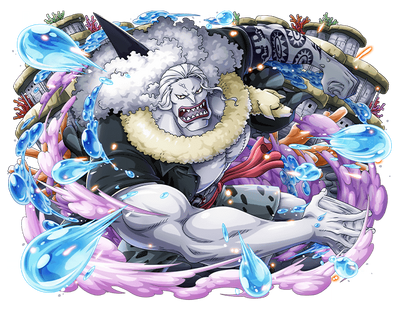 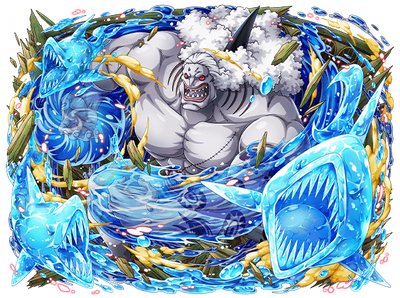 Hody Jones is the main antagonist of the Fishman Island Arc and a firm follower of the radical Fishman pirate Arlong. He is a great white shark Fishman who since his childhood was exposed and bathed in the hatred for the human race and grew to hold a massive disliking toward them, willing to go to extreme lengths to maintain the animosity between them.

Powers and Abilities: Superhuman Physical Characteristics, Enhanced Senses (As a Great White Shark Fishman, he should be capable of smelling even a small amount of blood up to 5 kilometers away), Extrasensory Perception (As a Great White Shark Fishman, he should be able to sense bioelectrical fields generated by other aquatic organisms and vibrations within the water, and see well in darkness), Underwater Breathing (Type 2), Natural Weaponry (Via his sharp teeth), Adept Trident Wielder, Skilled with Fishman Karate, Expert Swimmer, Limited Water Manipulation and Shockwave Generation (Via Fishman Karate), Limited Regeneration (Mid-Low, Like Arlong, Hody is also able to grow his teeth back immediately after they are broken), Healing (The Energy Steroids seem to have stimulant or revitalizing properties, allowing one to recover immediately from being wounded and use their strength to its full extent), Statistics Amplification (Can drastically increase his physical capabilities by consuming Energy Steroids, plus Fishman gains their natural strength and speed when underwater. As a Shark Fishman, each time his teeth is shattered and regenerate, it is stronger and more durable than before)

Striking Strength: Small City Class+ (He was capable of destroying a large Palace pillar and wall by merely gripping it) | Small City Class+ (Knocks Luffy's head quite a distance away. Launches a water bullet through people and pleateau)  | At least Small City Class+, possibly Large Mountain Class | Below Average Class

Durability: Small City level+ (Took multiple gunshots to the back and was completely unharmed) | Small City level+ (Took hits from Luffy and could continue fighting. Despite having been struck several times, and being flung through a cliff-side with kicks and punches, Hody only showed moderate signs of being hurt) | At least Mountain level+, possibly Large Mountain level (Much more durable than before and withstood a Red-Hawk from Luffy, forcing him to resort to Gear 3rd) | Below Average Human level (His body advanced to a point where doing basic functions such as walking is too much for his body to handle. He dislocated his wrist by merely pulling on an iron bar)

Stamina: High (Can take a beating from Luffy and continue fighting with no trouble even after being struck several times and sent through a large amount of rubble more than once)

Intelligence: Above average (He managed to trick his entire community into believing humans are evil by framing someone else after killing the queen of Fishman Island and kept it secret for years. He nearly succeeded in overthrowing Neptune and would have if not for Luffy's intervention)

Standard Tactics: Hody is a fairly well-skilled Fishman Karate practitioner, and will prefer to use ranged water-based attacks if possible to snipe an opponent from afar before blitzing in for a kill. Almost always bloodlusted considering his Great White Shark heritage, Hody is exceptionally straightforward in fights. He will attempt to make it a water-based fight for his own advantage if possible, use human shields, bite his opponent with his powerful jaws, and all around try to out-bruteforce his foe with raw physicals.

Of special note, Hody will indulge in Energy Steroid quite frequently, a drug which amps the user's physicals by 2 multiplicatively.

Weaknesses: The Energy Steroids that he carries with him grant him a great amount of power, but as a drawback, it causes the body to advance far faster than normal. Less than a few days after losing to Luffy, Hody Jones aged and weakened to the point where fighting was impossible

Fishman Karate: A martial art practiced by the Fishmen which allowed them to manipulate water in various ways. They could send shock-waves with their punches and kicks, or throw powerful water droplets at their enemies.

Hody was a practitioner of Fish-Man Karate and he showcased it by his manipulation of water. He could hurl simple droplets of water and turn them into deadly bullets with extreme kinetic force. He could also punch the water to send a shockwave through the water and the victims body.

After overdosing on Energy Steroids, Hody appeared to drip with water even though he wasn't soaked, suggesting that he'd been secreting it. However, according to Jinbe, Hody's Fish-Man Karate was at an amateur level despite his great strength as shown when fighting Luffy, for while Jinbe could do noticeable damage to the rubber man, Hody's attacks were ineffective. After his body became old and frail, his Fish-Man Karate ability most likely decreased significantly.