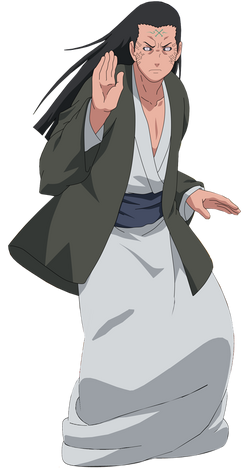 Hizashi Hyūga was a jōnin of Konohagakure. He was a genius of the Hyuuga clan and is also the father of Neji.

Superhuman Physical Characteristics, Acrobatics, Chakra Manipulation, Skilled Hand-to-Hand Combatant, Acupuncture, Pressure Points, Forcefield Creation with Kaiten, Duplication (Can create illusionary clones without any substance), Shapeshifting (Can transform into animate and inanimate objects), Statistics Amplification (Can enhance his physical capabilities and speed with chakra), Durability Negation (His fighting style allows his strikes to inflict internal damage to a target), Enhanced Senses (Byakugan allows him to see long distances and small objects that are impossible to detect with a normal human eye, has an almost perfect 360° field of vision, x-ray vision, and can see chakra), can replace himself with inanimate objects to avoid damage, Surface Scaling, Resistance to Illusion Creation, Paralysis Inducement (via paralysis jutsu)

Attack Potency: At least Town level (Powerscaling from Asuma Sarutobi. Kabuto Yakushi reincarnated him thinking that he'd be a valuable asset on the battlefield)

Speed: Possibly Massively Hypersonic+ (Should be comparable to Hiashi and other Jonin)

Durability: At least Town level, regeneration makes him extremely hard to kill as an Edo.

Stamina: High, Nigh-Unlimited as an Edo.

Intelligence: Was able to master advanced clan techniques on basic principle without any foreknowledge of their existence. Skilled martial artist and clever strategist. Otherwise noted to be a genius.

Weaknesses: His fighting style is primarily limited to taijutsu, there is a small blind spot near the back of his neck which his vision can not cover.

Byakugan (White Eye): This eye technique is the kekkei genkai of the Hyūga clan and one of the Three Great Dōjutsu. Wielders of this eye can see long distances (at least up to 10 kilometers) and can see objects that are too small for the normal eye to detect (such as the tenketsu points on a human's body). The Byakugan has an almost perfect 360-degree field of vision, though there is a small blind spot located near the back of the user's neck. The eye can also see through objects as well as many barriers and can see chakra clearly.

Juuken (Gentle Fist): By taking advantage of the Byakugan, the user can see a person's chakra pathway system. Juuken inflicts internal damage through attacking the body's Chakra Pathway System by injecting chakra into certain pressure points (tenketsu), subsequently injuring internal organs that are closely intertwined with the pathways. Once these tenketsu points are struck, they are in turn sealed and can no longer produce chakra for a certain amount of time, severely limiting the victim's chakra flow.

Retrieved from "https://vsbattles.fandom.com/wiki/Hizashi_Hyuuga?oldid=6005860"
Community content is available under CC-BY-SA unless otherwise noted.