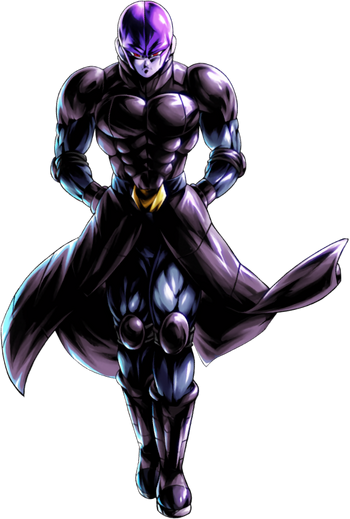 Hit is the "Legendary Hitman" of Universe 6, an incredibly skilled assassin who has never once failed in his job, killing each target with a single strike.

Powers and Abilities: Superhuman Physical Characteristics, Master Martial Artist, Acrobatics, Ki Manipulation (Can be used defensively and offensively, to strengthen his skin or to fire ki blasts, which can home in on targets, and form defensive barriers), Ki Sensing (Can locate others by reading their ki), Self-Sustenance (Type 1), Stealth Mastery, Flight, Spaceflight, Time Manipulation (Can store, skip, stop and suspends beings in time), Afterimage Creation, Illusion Creation (He can create illusory duplicates out of his ki to mislead opponents), Shockwaves Generation, Intangible and Invisible attacks, Pocket Reality Manipulation (Hit stores the time he skips in a parallel dimension created by his ability, which he can enter to render himself intangible and use limited teleportation), Limited Space-Time Manipulation (His dimension is created with the time he collects), Pressure Point Strikes, Reactive Evolution (Hit rapidly improves his power and skills when they are challenged, extending the duration of his Time-Skip), Longevity, Can possibly create dimensional rifts and destroy space-time and pocket dimensions with his energy via powerscaling, Resistance to Extreme Cold and Cosmic Radiations

Attack Potency: Universe level (Easily defeated SSB Vegeta and harmed SSB Goku, before growing in power to match him after he's used Kaio-ken. When using the full extent of his power and killing techniques, he proved a threat for Goku after the events of the Future Trunks Saga, and he improved further during the Tournament of Power, ultimately overpowering Dyspo), can ignore durability through phasing

Speed: Massively FTL+ (He can keep up with both Vegeta and Goku, and eventually improved to the point that he could overwhelm Dyspo)

Intelligence: Hit lives up to his title of "Never-Miss Hit", having gone over a thousand years without failing in a single assassination and killing his targets with a single blow. Though his skills mostly lie in the realm of assassination, leaving him lacking when it comes to non-lethal combat, Hit is an extremely skilled martial artist all the same, relying on his precision and finesse. His casual stance in battle, with his hands tucked into his pockets, allows him to conceal the movements of his fists in conjunction with his Time-Skip, leaving opponents incapable of properly reacting to his attacks as he suddenly strikes their vital points before they realize he's throwing a punch. Hit's no-nonsense approach to combat is incredibly effective, as he quickly and efficiently dispatches any threat with brutal yet graceful ease.

Weaknesses: Hit's movements during his Time-Skip can be predicted, and his attacks thus blocked or dodged, though this is difficult. His Cage of Time requires quite a lot of energy and focus to keep an enemy trapped.

Ki: The fighting power and life force of a martial artist, a tangible energy derived from the user's vigor, courage, and mind. It can be used in a number of ways, such as to surpass the limits of one's body to greatly increase in strength, and it can be fired as blasts of energy or used to create defensive barriers. The foremost fighter of Universe 6 during their tournament with Universe 7, Hit is an incredibly powerful and skilled opponent who can use his ki in a variety of lethal ways as an assassin.

Pure Progress: An improvement-based ability utilized by Hit in place of the transformations used by many other fighters, rapidly enhancing his skills whenever he is pushed to his limit. For example, during his first fight against Goku, Hit's Time-Skip doubled in duration before growing further, reaching half a second, and by the time of their second fight, it had grown even longer. He even unlocked enhanced applications of the technique, such as his Time Freeze.

Viewtiful Joe (Viewtiful Joe) Joe's Profile (Both were 3-A versions, and speed was equalized)