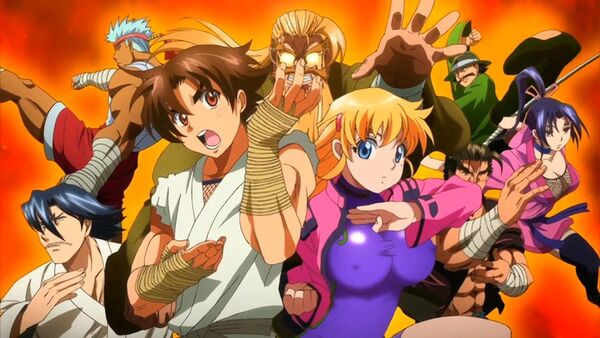 History's Strongest Disciple Kenichi revolves around the titular protagonist Kenichi Shirahama. After a lifetime of being bullied and degraded, Kenichi decides to learn how to stick up for himself when he meets a girl named Miu Furinji, granddaughter of superhuman martial arts master Hayato. Once enrolled in her dojo, Ryōzanpaku, he experiences hell-like training at the hands of its 6 masters in order to learn each of their styles of martial arts.

Upon learning of his newfound fighting prowess, a gang of bullies named Ragnarok attempt to recruit him or take him down. After disbanding them, Kenichi and his friends are targeted by the rival dojo Yami. Unlike Ryōzanpaku who believe all lives are worthy and must be spared in battle (Satsujin-Ken), Yami subscribe to the philosophy that Martial Arts are inherently a tool used for killing, and while not obliged to murder, it is far from wrong to do so (Katsujin-Ken) Ryōzanpaku eventually tries to combat the school in order to stop their leaders' goal of spreading warfare and chaos around the world.

While relatively weak compared to much other anime and manga, Kenichi is a pretty powerful verse in its own right. With some of their masters being able to casually toss cars, make entire buildings collapse, and fight at several times the speed of sound.

Characters notably possess a lot more martial arts/fighting skill than most other series. Along with interesting abilities like walking on water, redirecting attacks, using their aura offensively, allowing them to defeat people with their mere presence, cause people to get amnesia, and more.