Created a long time ago by a CPU from Planeptune, Histoire is said nation's Oracle, with the purpose of keeping a record of Gamindustri's history. She is very mature and serious, rarely plays around and is always focused on her work as an Oracle. She frequently scolds Neptune with long lectures due to the latter's laziness, forcing her to abide to her duties as a CPU. Despite being always devote to her task, it sometimes takes her a while to gather the information she is asked for, always in a group of 3 of varying units of time.

Classification: Oracle of Planeptune, Artificial being, "The World's Everything"

Attack Potency: Universe level+ (Can control all of existence itself. Alongside Ultradimension's Histoire, stabilized the flow of time between the Hyperdimension and the Ultradimension, making them flow at the same pace)

Durability: Universe level+ (Should be able to tank her own attacks)

Stamina: High. Can remain operative for long amounts of time while executing a single task, the longest known being 3 months

Range: Low Multiversal (Can establish contacts with people in other dimensions, has stabilized the flow of time between two dimensions alongside another Histoire)

Intelligence: Genius. Holds the records of Gamindustri's history, has been Planeptune's Oracle for several generations of CPUs and is considered one of the most knowledgeable beings in the world

Weaknesses: Some tasks might take a long time to be accomplished 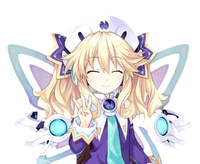 "It will take about three days!"
Add a photo to this gallery