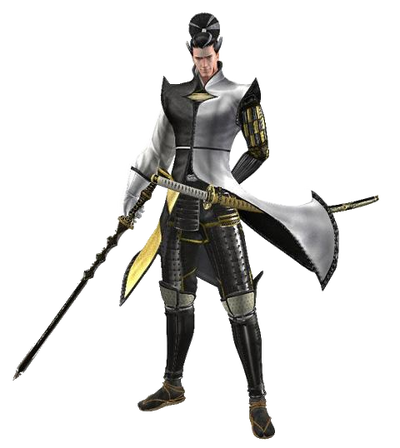 A charismatic man, Matsunaga is able to both charm and belittle those he is speaking to. Always calm and detached, he doesn't believe in things such as love and feels that strength is all that matters. He serves as one of the Main Antagonists of Sengoku Basara along with Toyotomi Hideyoshi and Oda Nobunaga. In one of his ending he even was able to defeat the man he loathed so much. He is also responsible for Hideyoshi's corruption and Akechi Mitsuhide's change into Tenkai.

Attack Potency: At least Large Planet level (Could easily curbstomp both Ieyasu and Mitsunari. Was able to defeat Nobunaga along with Tadakatsu and Yoshitsugu. Could casually match Yoshiteru. Seen as one of the top tiers of the verse.)

Speed: At least Sub-Relativistic with Sub Relativistic+ Combat and Attack Speed (Can outmatch other Basara characters, who are at least comparable to the Ninja Trio that cut up the moon)

Retrieved from "https://vsbattles.fandom.com/wiki/Hisahide_Matsunaga?oldid=4112911"
Community content is available under CC-BY-SA unless otherwise noted.