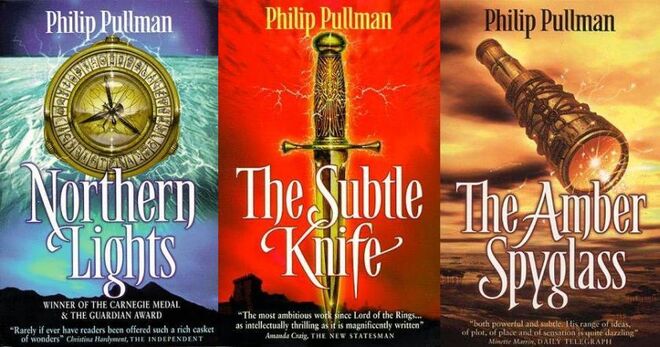 For detailed information about this franchise, visit the His Dark Materials Wiki.

His Dark Materials is a fantasy trilogy written by Philip Pullman, consisting of The Northen Lights, The Subtle Knife and The Amber Spyglass, as well as a couple of spinoff books (Lyra's Oxford, Once Upon a Time in the North). Known for rather un-subtle messages against religion. It follows the Lyra Belacqua's journey across the Northern tundra and eventually spills out into the further multiverse and the rebellion against the Authority. The first book was adapted into a movie called The Golden Compass; unfortunately, it was poorly received. A French comic book adaption is in the works, with the first part of the Northern Lights already out in France.

Dæmon's are the physical manifestation of the soul. Dæmon's of children can change shape, but settle into a permanent form when they reach puberty. Dust is what Dæmon, angels and spiritual matter are made out of.

Despite spanning a multiverse, it's a rather weak one. That's not to say, however, it's without hax, such as a knife that can cut to other universes, soul-eating spirit creatures and a machine that runs on intention. The strongest thing in the verse is the DNA bomb, which can destroy anyone no matter where they are in the multiverse.

Start a Discussion Discussions about His Dark Materials