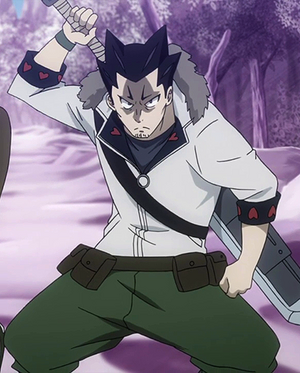 Speed: Massively Hypersonic+ (Kept up with Natsu and Gray)

Intelligence: Above average (A skilled swordsman and hunter, average otherwise)

Super Slash (超斬る Chō Kiru): A simple, yet somewhat acrobatic move which Hiroshi employed in response to Gray's Ice-Make: Freeze Lancer spell, performing a leap which allowed him to both evade most of the generated ice weapons and to slice through one of them which was honing in on him. Super Stab's momentum, as shown on an unintentional target

Super Slash
Add a photo to this gallery

Super Stab (超突き Chō Tsuki): An extremely powerful strike which takes full advantage of the Chain Blade's characteristics. Hiroshi rapidly extends his sword's secondary blade in the opponent's direction, trying to impale them with it. This move not only takes the foe by surprise, but also possesses incredible momentum, enough to generate a powerful shockwave in the air in the same direction of the lunge: when Gray dodged it, Super Stab reduced a massive tree, several meters away from both the Fairy Tail Mage and the tip of the Chain Blade itself, to pieces, engulfing it into an explosion.

Super Stab
Add a photo to this gallery