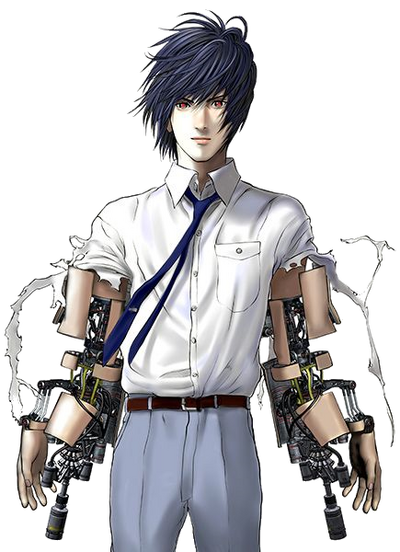 Hiro Shishigami is the main antagonist of Inuyashiki series. He is a teen sociopath that becomes an android along with Ichiro Inuyashiki after being killed by a UFO. Unlike Inuyashiki, he uses his new powers to become a mass murderer and targeted innocent families by picking random houses for his amusement. His cruel acts of violence caused the attention of police as a dangerous criminal of society.

Tier: 8-A, High 7-A with Self-Destruction

Lifting Strength: Class K (Should be comparable to Ichiro)

Stamina: High (Should be comparable to Ichiro)

Range: Standard melee range, several kilometers with projectiles, higher by combining with Technological Manipulation (Able to shoot people through a cell phone screen and TV monitor, can control several airplanes on the sky)

Standard Equipment: A pair of jetpacks in his back, several arm cannon

Intelligence: High (After becoming an android, he was able to quickly learn about his robotic body and his functions in a few days), capable of gaining and analyzing information immediately through his robotic brain

Weaknesses: His sensitivity to pain is not impaired, and he feels pain just like any human being. He needs to drinks water as fuel. Without refill it, after using his powers for a long time off after a considerable extent, he will dehydrate which renders him immovable and unable to use any of his robotic capabilities. He can still get tired and need to sleep