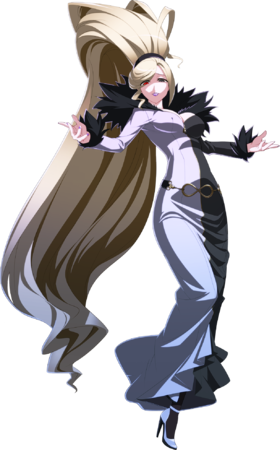 Hilda serves as one of the two main antagonists of Under Night In-Birth along with Kuon. She is an extremely powerful In-Birth who seeks to become a Re-Birth. She leads the organization Amnesia and goes by the alias "Paradox" which also is the name of her ability.

Age: Late Teens to Early 20s (Only a few years older than Yuzuriha)

Attack Potency: At least Town level (Constantly considered to be one of the strongest characters in the series. Noted to wield infinite EXS. Can defeat both Linne and Hyde at the same time in certain story modes)

Speed: Lightspeed (Can keep up with the rest of the cast)

Intelligence: Hilda is stated to not be the smartest individual and is quite reckless and relies on emotion. It is also stated that she is not the most skilled fighter when compared to those who have lived for ages like Linne or Waldstein. This has led her to being defeated by the weaker Linne in the latter's arcade run due to her lack in skill. Despite this however, she has shown to be able to defeat more skilled opponents in battle. She prefers to keep a distance and spam her Paradox blades at her opponents. Then once the are vulnerable or injured enough, absorbing their very existence.

Weaknesses: Very Arrogant and Unskilled at times. Can easily become flustered or emotional.