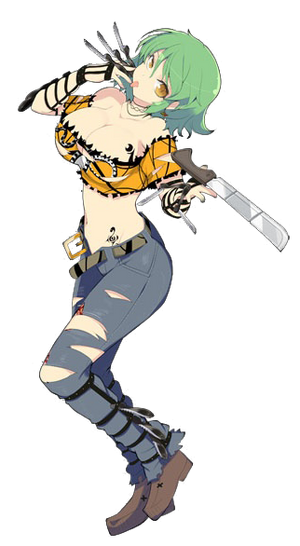 She's a third year Hebijo student like her allies (joining becoming the renegade Crimson Squad), but she's known more for her lack of emotions. She serves as Katsuragi's rival due to her lack of understanding for the former's excitement for a fight with her.

Speed: Supersonic (Can keep up with other shinobi, should be comparable to Murasaki and Ryobi) | At least Supersonic (Faster than her previous form)

Durability: Large Building level (Traded blows with her fellow Crimson Squad allies and others such as Katsuragi. Survived the explosion which leveled the original Hebijo Academy), lower with Frantic Mode | City Block level+ (Should be comparable to Crimson Homura and Ultimate Asuka)

Stamina: Above average (Mostly due to her training as a shinobi and a renegade)

Weaknesses: Can't comprehend her lack of emotions, thus making it hard for her own allies or enemies to understand her. Highly vulnerable when her clothes are completely ripped in battle.