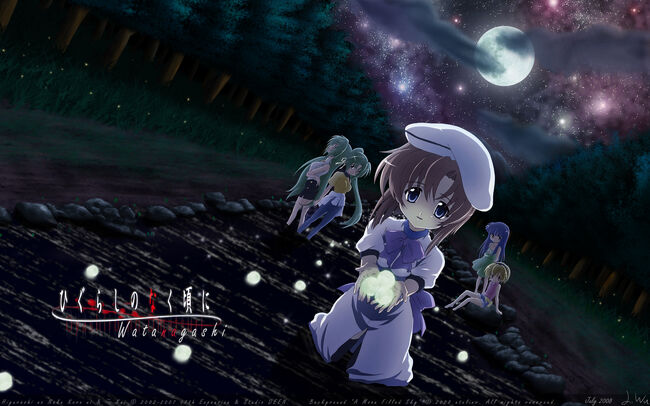 For detailed information about this series, visit the Higurashi no Naku Koro ni Wiki.

Higurashi - When They Cry (or Higurashi no Naku Koro ni, which translates to When the Cicadas Cry) is a murder mystery visual novels series. It serves as somewhat of a sister-series and the predecessor to Umineko, and both are set in the same cosmology (with some characters even crossing over). An anime and several OVA's have been adapted from the first 4 arcs, and a manga covering the entire series has also been written. The series is set in the seemingly peaceful village of Hinamizawa. But it's soon discovered that each year, someone is murdered and someone else dissappears. The village itself is stuck in a time loop.

For the most part, Higurashi is a weak verse. Most of the characters sit at street-level, though above peak-human in speed at least. However, the series takes place within the same cosmology as Umineko no Naku Koro ni, its successor, making it technically identical in power.

Hanyu and Sea of Fragments Rika can warp reality on a Tier 1 scale.

Start a Discussion Discussions about Higurashi - When They Cry