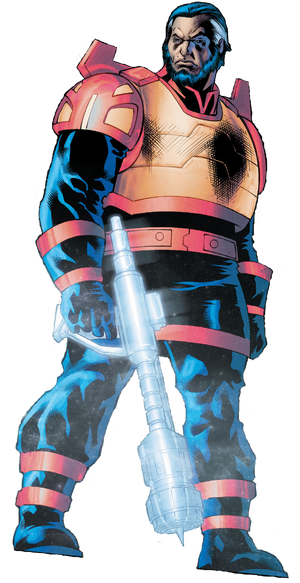 Highfather is one of the most powerful New Gods and the benevolent ruler of New Genesis, an archetypal world beyond the bounds of time and space.

In the past, Highfather was known as Izaya the Inheritor, and he was the mightiest warrior and leader of New Genesis. After his wife Avia was killed by Steppenwolf, Izaya initiated war against Apokolips, unknowingly playing into Darkseid's plans. Eventually, in despair, Izaya wandered into the wilderness in an attempt to find answers and came upon the Wall, a relic of the Old Gods that was connected to the Source. Izaya formed a connection with the Source, gaining wisdom and transforming into Highfather.

Returning to the other gods of New Genesis, Highfather preached the teachings of the Source and became their spiritual leader. Eventually, after long conflict with Darkseid, Highfather swapped sons with him in accordance with Metron's peace treaty. He then dedicated himself to raising Darkseid's son Orion.

It was later clarified that Highfather and the other New Gods are not simply alien beings from an extradimensional realm, they are living ideas from a higher, archetypal realm; every storyline except for Final Crisis simply deals with emanations of the higher-dimensional deities touching the lower-dimensional multiverse. Following the events of Final Crisis, Highfather and the other New Gods were severely weakened and reduced, recuperating within the Earth-51 universe.

Superhuman Physical Characteristics, Genius Intelligence, Weapon Mastery and Martial Arts (As Izaya, was a master of weaponry and a "superb" hand-to-hand combatant), Flight, Immortality (Type 1; Type 9 - the true Highfather exists in a higher plane of existence), Self-Sustenance (Type 1), Large Size (Type 6 - New Gods are so large that the Earth is a speck to them), Extrasensory Perception (Can sense targets throughout time and space), Stealth Mastery (Prevented a Mother Box from detecting him), Matter Manipulation (Turned Lightray into slime and threatened to scatter him across the sky as stardust; Reconstructed Barda's cooking), Energy Manipulation (Can manipulate energy around himself, even freezing Darkseid's Omega Beams; Restored Wildfire from being dissipated in quanta), Energy Projection (Can fire energy blasts on a massive scale), Energy Absorption (Can drain energy out of targets), Homing Attack (Can split his attacks into multiple parts to seek out targets), Forcefield Creation (Made a large cone of protective light and a spherical barrier around himself), Spatial Manipulation (Fused Apokolips and New Genesis so that they were spatially warped together), Life Manipulation (Drew out latent strength from Beautiful Dreamer's soul to help her in childbirth), Creation (Made toys for children), Teleportation and Dimensional Travel (His Wonder Staff can achieve teleportation without a boom tube, and he can summon boom tubes without a Mother Box), BFR (Banished Parademons), Time Travel (Orion stated that any god can easily move through time), Summoning (His Alpha Bullets can summon anyone to him, even across time and dimensions; Can also intercept other teleportation beams), Pocket Reality Manipulation (Began spinning Orion into a cosmos of torment), Intangibility (Can phase through solid matter), Telekinesis (Took the Black Racer's ski pole from Scott Free), Telepathy (Can link minds together using Source energy and instantly read minds with a touch), Memory Manipulation (Can remove memories and implant fake ones), Biological Manipulation (Restored the people of Scott Free's neighborhood from being devolved into beasts), Sound Manipulation (Can howl forcefully enough to shake the cosmos), Technology Manipulation (His Wonder Staff can interact with basic technology), Water Manipulation (Can use water to view faraway events), Shapeshifting (Can alter his and others' appearances), Astral Projection (Can make large projections across interdimensional distances), Perception Manipulation (Cloaked himself from detection), Healing (Can channel Source energy to heal others), Avatar Creation (Made an avatar, similarly to Darkseid, while he was trapped in the Source Wall), Statistics Amplification (Can channel the mystic force of New Genesis to increase the power of his blasts), Sealing (Used the "core of his omnipotence" to seal off the god asylum), Power Bestowal (Passed his power to Atinai to help her construct Supertown and restored Bouncing Boy's powers after Darkseid removed them), Power Modification (While weakened, made Pre-Crisis Superboy and Supergirl able to ignore red solar radiation), Fusionism (Fused himself and four others into The One), Resurrection (The Alpha Effect can be used to revive the dead), Conceptual Manipulation (Type 2 - Scott Free used the Alpha Effect to depower and banish the Black Racer)

All previous abilities to a much greater degree, plus Abstract Existence (Type 1 - New Gods are living ideas from a platonic, archetypal world), Self-Sustenance (Type 3), Non-Corporeal, Higher-Dimensional Existence, Large Size (Type 10 - Comparable in size to Godhead Darkseid, who was large enough to fall over the entire multiverse)

Attack Potency: Multiverse level (Was evenly matched with Darkseid even before gaining his connection to the Source, and afterward was the strongest of the New Gods. Takion viewed Highfather and Darkseid as being in a league of their own. Highfather considered Takion to be his avatar and was so powerful that Darkseid stated only Orion's true power could hold him) | Solar System level (Stalemated Post-Flashpoint Darkseid for seven days. Pierced an Nth Metal Golem, something not even Post-Flashpoint Orion could do. Casually swatted aside a combined attack from the Templar Guardians) | Low Complex Multiverse level (Comparable to Godhead Darkseid)

Stamina: Infinite (His energy is channeled directly from the Source, which is infinite) | Godlike (Can fight for seven days straight) | Infinite (Non-corporeal abstract being)

Intelligence: At least Extraordinary Genius (Is comparable enough to Darkseid that he has successfully maintained a stalemate against him for eons, countering his never-ending schemes. Has countless years of experience in strategy, military tactics, and governing. Post-Flashpoint Highfather was able to effortlessly gain full control over the Life Equation when he was channeling it through Kyle's mind, while Kyle himself could barely handle it despite being the one to obtain it)

Standard Equipment: Wonder Staff, through which Highfather can channel the energies of the Source | War-Staff

Weaknesses: Highfather is vulnerable to radion, a lethal substance to New Gods. It should be noted, however, that powerful New Gods like Kalibak are able to easily survive normal radion shots.

Alpha Effect: Highfather's innate power is heavily implied to be the same as Scott Free's, the opposite to Darkseid's Omega Effect. However, he has only shown one ability that can be specifically attributed to this power.

Source Energies: Highfather possesses an innate connection to the Source through his Wonder Staff. He is never without the staff, and uses it to access an enormous variety of abilities.

As all instances of Highfather seen in lower-dimensional realms are infinitesimally small parts of his true being, it stands to reason that Godhead Highfather possesses all of the abilities demonstrated by them but to a much greater degree.