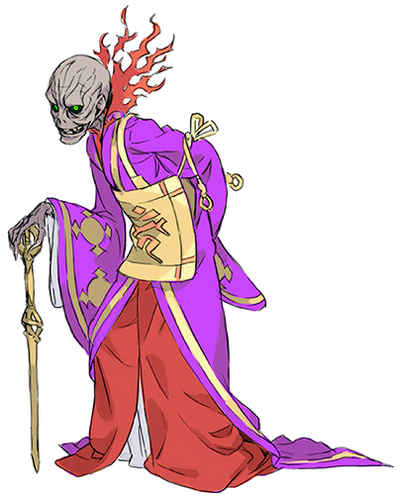 The High Priest (僧正 Sōjō) is a "bizarre magician", a magic god, who dwells in a territory beyond a certain layer of the world.

In the past, as a follower of the Japanese variety of Buddhism, the High Priest subjected himself to self-mummification, starving himself so his human form would transcend the six paths, becoming a Buddha in just one generation, in hopes of saving all people. However a faction opposed to him becoming a Buddha sabotaged his attempt and twisted as a result, he became a Magic God instead. At some point, he was somehow involved in the death of Aleister Crowley's daughter.

Attack Potency: At least High Complex Multiverse level (Much more powerful than Othinus, would accidentally destroy the world by moving an arm or a leg since he's too big of an existence for the world; fully capable of destroying the Hidden World, a realm which Othinus did not know of and never reach even with her full power) | High Complex Multiverse level (Restricted to 1/∞ of his strength so as to not accidentally break the world) | At least Planet level, likely far higher (Should be comparable to Niang-Niang and other Nerfed magic gods)

Speed: Immeasurable (Exists in the hidden world, in which the concepts of time and distance don´t apply) | Unknown, likely Immeasurable | Sub-Relativistic (Should be comparable to other nerfed magic gods)

Weaknesses: He's very arrogant and looks down on everyone

Key: Base | Under Zombie's Spell | After Aleister's Hijacking Spell