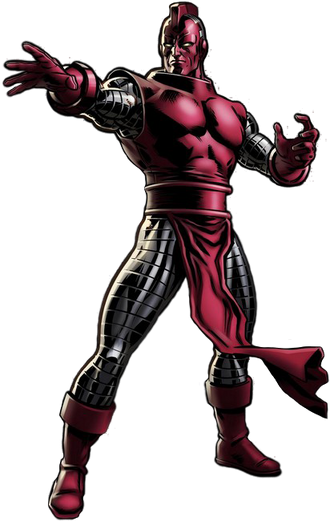 Classification: Human scientist, geneticist, founder of the Knights of Wundagore

Powers and Abilities: Superhuman Physical Characteristics, Genius Intelligence, Flight, Enhanced Senses, Energy Manipulation, Energy Projection, Telepathy (Can casually kick Moondragon out of his head and was able to read Adam Warlock's thoughts), Teleportation, Size Manipulation, Astral Projection, Regeneration (High-Mid, regenerated from being ripped to pieces and pulverized into organic jelly by the Hulk; possibly Mid-High as long as his armor exists, it contains his complete genetic information and can regenerate his body or even create a whole new body for Wyndham), Power Absorption (Was able to steal the powers of the Silver Surfer and turn him mortal), Immortality (Types 1 and 3), Matter Manipulation (Terraformed the moon and created a prison that can hold the Hulk), Resurrection, Forcefield Creation (Can block attacks from Hyperion), Precognition, Soul Manipulation (destroyed a swarm of ghosts), BFR, Biological Manipulation (Can accelerate and decelerate evolution. Tore out Sabretooth's nervous system), Transformation (Transformed a severed arm into a weapon capable of fighting Hyperion and can control the transformation of the Hulk), can survive in a noncorporeal state and return to his body anytime should he be killed, Resistance to Magic, Energy Manipulation and Mind Manipulation

Attack Potency: Solar System level (Can damage or one-shot Thor, harmed Hyperion and the Hulk, traded blows with Apocalypse, can casually blow up the Earth, destroyed a star because Ultron disgusted him, and can create planets or Counter-Earths)

Speed: Unknown, Massively FTL+ with his spaceship (Adapted a moon to fly at this speed)

Lifting Strength: At least Class 100 (Said to be able to lift over 100 tons in the Fantastic Four comics)

Range: At least Planetary with energy projection (Can wipe out the life of entire planets). Cross-universal with teleportation (Escaped from an alternate universe after being banished by Galactus)

Intelligence: Supergenius (A master of genetics who possesses all human knowledge in biology, chemistry, medicine, physics, engineering, psychology, and cybernetics. Created technology to siphon the power cosmic from the Silver Surfer, adapted a moon to fly at faster-than-light speeds, terraformed the moon, can use a single piece from the Earth to create his own planets, gave Ultron an organic body, and has created various lifeforms capable of fighting the Hulk and Thor. One of few mortals considered to have an intellect comparable to cosmic entities)

Weaknesses: Occasionally insane, arrogant, and suicidal (However, he designed his armor to keep himself alive at all costs).