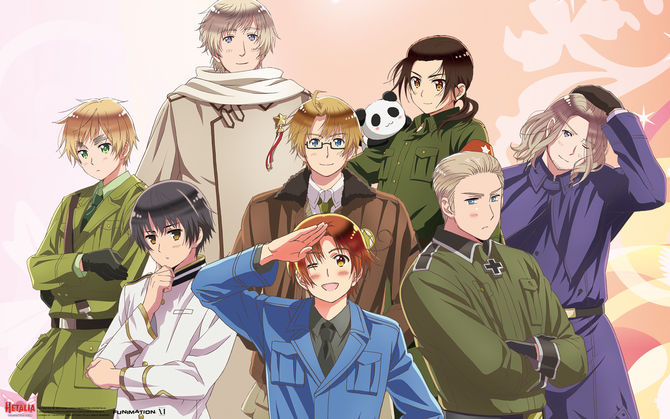 For detailed information about this series, visit the Hetalia Archives.

Axis Powers Hetalia (ヘタリア Axis Powers, Hetaria Akushisu Pawāzu) is a webcomic, later adapted as a manga and an anime series, by Hidekaz Himaruya (日丸屋秀和 Himaruya Hidekazu). The series presents an allegorical interpretation of political and historic events, particularly of the World War II era, in which the various countries are represented by human-like characters.

Hetalia (ヘタリア) is a portmanteau combining hetare (へタレ, Japanese for "unreliable") and Italia (イタリア). This is to make light of Italy's apparent cowardice during World War II and overall character.

Each of the characters is personified beings of the country they represent. Not only do they represent known stereotypes, people, and cultures of their said country, their entire body is connected to the landmass their country occupies. Many body parts on the avatar represent real life landmasses. For example, The nations feel pain when a power struggle happens in their government or land. Also, the nations feel pain when a natural disaster occurs, such as when Japan experiences stomach pain during the Great Kanto Earthquake of 1923.

Currently, each character is rated Low 6-B (Small Country Level) but as manga and anime are ongoing, this is subject to change.

The characters of the verse are practically immortal and are as old as their actual country is. However, the only way they can "die" is if the country that character itself represents falls apart, dissolves, or is taken over by another country as it was suggested here.

However not all nations that are absorbed by other characters necessarily die. After World War 2 in the series, the Soviet Union (although referred to as Russia) is in "possession" of several character states such as: Latvia, Ukraine, Belarus, Estonia, Lithuania and other Soviet satellite states in the real-life past.

It seems that to completely kill a character nation, 2 nations must wage war and one must simply win, and annex them as a part of the victors country.

A few notable main characters such as Britain in the series seems to have magical powers. Britain seems to use black magic. He also has the ability to see spirits from his nation and others along with the ability to summon other magical spirits as well, such as when he visited Japan and could see Japanese spirits, while Japan himself, could not.

America possesses an abnormal amount of strength, shown even as a child by easily swinging a full-grown buffalo around, and has been once seen running around dragging a heavy Rolls Royce vehicle, belonging to England, behind him for an hour in order to ask permission to borrow it. In the NotoSama 6 game, America was able to stop a speeding bus with the heel of his foot.

Another country that has other notable powers is Russia. When he is angry he has a purplish demonic glow. This is magic/aura that the characters have, it does strike fear in other nations. He also has the strength to destroy several tanks with his bare hands, and his scarf also is used to strangle people, as Russia has used it on America when he interrupted him from speaking. He has some weather manipulation as well.

Every character country is as powerful as the country they represent in real life.

When a nation's economy goes through a recession or any other sort of crisis, it causes them to catch a cold. Examples in the series include:

Intense political situations may cause nations to become ill, as well as disasters in their homeland. Examples in the series include:

Himaruya has also stated that bad weather may also cause nations to feel ill, such as if it rained too much. It was also said that such an occurrence would vary among different nations, along with their body temperature.

Pictonians
Add a photo to this gallery