Heroic Age Is a science-fiction anime series released in 2007 by XEBEC, inspired by the Greek myth of Hercules. Heroic Age focuses on the conflict between the Iron Tribe (humanity) and the other Tribes throughout the universe (namely the Silver Tribe & the Bronze Tribe), and the power of the missing Heroic Tribe.

Heroic Age is a respectably powerful verse. The five Nodos are beings who have been granted the power of one of the Heroic Tribe and can easily unleash enough power to destroy an entire planet and can fight for hundreds of hours at a time, and fly interstellar distances. A Nodos can risk going into madness, which puts entire solar systems at risk.

The tech-levels are high enough for FTL travel and dimensional jumpways (called Star Ways) to exist, and humanity has shown to be powerful enough to destroy planets like Jupiter.

There also exists the Golden Tribe, a powerful race that existed long ago and left the universe to be inherited by the other Tribes. 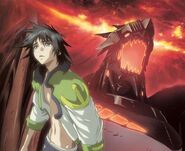 The Golden Tribe
Add a photo to this gallery