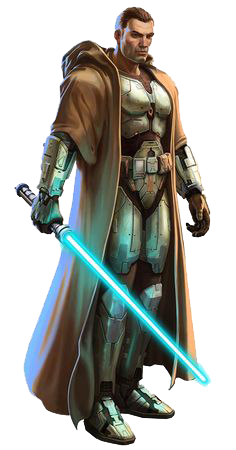 The Hero of Tython was a powerful Jedi Knight and later Jedi Master who battled the resurgent Sith Empire during the Cold War and subsequent Galactic War, serving as the Battlemaster of the Jedi Order. Born before the end of the Great Galactic War between the Galactic Republic and the Sith Empire, the Hero trained under several Masters across the galaxy during the following Cold War until 3643 BBY, when the Jedi was sent to the Jedi Order's homeworld of Tython.

Name: Unknown, referred to as "The Hero of Tython"

Attack Potency: Solar System level (Managed to outmatch the Emperor, even saying that the Hero of Tython "harnessed immense power" after defeating him. Referred to as Vitiate's "most powerful opponent", and thus should be above Novel Revan. Held his own against Reborn Revan and the more powerful Valkorion. Most likely is the character class that fought Vaylin and Arcann).

Lifting Strength: Peak Human naturally. Can be augmented to Superhuman levels with the Force. Class G with telekinesis (One of the most powerful Jedi of his own or any other era. Should therefore be far superior to Padawan Rivi-Anu who, while injured and exhausted, briefly held up a Venator-class star destroyer [a heavy cruiser class warship whose mass should be several to tens of millions of tonnes])

Striking Strength: Solar System Class with Force Amplification (Exchanged blows with Vitiate, was stated to be the greatest Padawan in generations by multiple Jedi Masters, including Satele Shan, at various points in the game).

Stamina: Very high (Went through the entirety of Kaas City on his way to fight the Emperor, defeating hundreds of Imperial soldiers, droids and Mandalorians along the way).

Intelligence: Incredibly skilled combatant, able to duel and outmatch many of the most well-known duelists in both the Jedi Order and the Sith Empire, fluent in many languages besides Basic, and underwent technical training as a Jedi beyond that of an average individual.

Weaknesses: The Hero's Force reserves could theoretically be drained by extremely long periods of furious combat, forcing him to stop using Force Amplification and thus greatly weakening him, however, his vast reserves make this very unlikely.

Start a Discussion Discussions about Hero of Tython