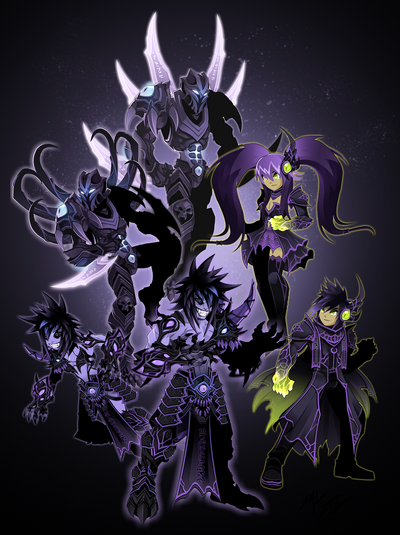 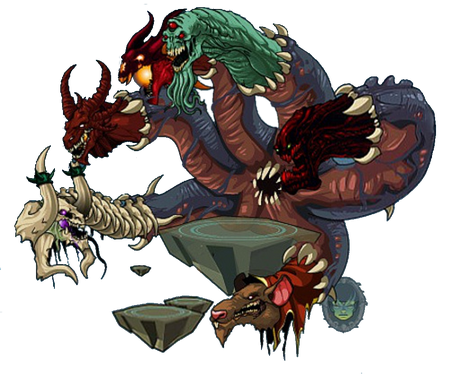 The Hero of Lore is whoever they need to be to save the day. They are the main character of Adventure Quest Worlds, and ends up playing the role of protagonist.

Name: Varies (Decided by the player), The Hero, The Eternal Dragon of Time

Superhuman Physical Characteristics, Regeneration (Low-Godly: Survived having his soul crushed by Drakath which was shown to have physically erased Sepulchure as he was reduced to an empty suit of armor), Immortality (Types 1, 2, 3, 5, 8, can become an undead to gain Type 7. Type 4 with the aid of Death or the Eternal Dragon of Time, Possibly 9: Is a humanoid form of the Eternal Dragon of Time in a condition where he hasn't fully unlocked its full powers), Self-Sustenance (Types 1, 2, and 3), Weapons Mastery, Healing, Magic, Void Manipulation, Holy Manipulation, Summoning, Paralysis Inducement, Teleportation, Elemental Manipulation, Soul Manipulation, Supernatural Luck, Life Force and Energy Absorption, Duplication, Acid Manipulation, Disease Manipulation, Reality Warping, Illusion Creation, Necromancy, Spatial Manipulation, Forcefield Creation, Sleep Manipulation, Attack Reflection, Extrasensory Perception, Power Bestowal, Empathic Manipulation, Heat Manipulation, Petrification, Probability Manipulation, Statistics Amplification, Status Effect Inducement, Flight, Spaceflight, Time Manipulation, Time Stop, Life Manipulation, Portal Creation, Fear Manipulation, Matter Manipulation, Transmutation, Shapeshifting, Energy Manipulation, Radiation Manipulation, Explosion Manipulation, Mind Manipulation, 4th Wall Awareness, Bone Manipulation, Non-Physical Interaction, Acausality (Type 1: [did not transform into a time wraith when sent back in time which occurs through a time paradox. Interacted with multiple past versions of himself within the 4th-dimensional Pyramid] and Type 2 on Lore [There existed no past version of himself in where he previously was in that time period when sent back in time]. Type 3 throughout all timelines [The Hero's existence is mentioned to have happened before, is happening now on other timelines, and will happen again]), Age Manipulation with Eternal Inversionist's Ancient Wrap (Can cast ancient bandages at his enemies, causing them to rapidly age), Clairvoyance, Animal Manipulation, Pressure Points, Homing Attack, Antimatter Manipulation (Can interact with and handle Anti-Matter Gems, Antimatter dye, and the Star Core), can gain Cyborgization and Inorganic Physiology and Invisibility, Damage Reduction, Corrosion Inducement, Damage Boost, Damage Transferal, Glyph Creation, Statistics Reduction, Cosmic Awareness, Dimensional Storage, Dimensional Travel with ShadowStalker of Time (Can warp between time-streams through shadows), Pain Manipulation, Telepathy with Daimon (Can reach out and cause pain to an opponent with his mind), Blood Manipulation with Blood Sorceress and Void Highlord, Madness Manipulation (Type 2) with Chrono Assassin (Can sever an opponent's mind in time making causing them to go insane), Power Absorption (killed Death and stole Death's powers and status), Abstract Existence (Type 2) as Death. Corruption (Types 1, 2, and 3), Chaos Manipulation, and Biological Manipulation as the 13th Lord of Chaos. Resistance to Petrification (Broke out of Teja's petrification spell which would have been permanent for normal individuals), Morality Manipulation, Corruption, Mind Manipulation (Fully recovered from Drakath's Chaorruption), Death Manipulation (Unaffected by Sepulchure "killing" Death which turned everybody on Lore into zombies despite being dead or alive), Time Stop, Gravity Manipulation (Immune to the effects of the Black Hole Sun), Time Manipulation and Spatial Manipulation (Due to his journey within the Shifting Journey and the recovery of the Infinity Shield, the hero was granted resistance to 4th Dimensional Pyramid's effects on space and time), and Power Nullification as the 13th Lord of Chaos (Chaos powers are unable to be removed or cancelled except by the Tears of the Mother)

All previous, Large Size (Type 9. Contains three entire timelines within its heart), Non-Corporeal, Time Travel, Avatar Creation, Power Mimicry (Gains the powers of a select six major beasts within Lore), Immortality (Type 4), Madness Manipulation (Type 3), possibly Abstract Existence (Type 3. Its existence was defined by the perception of others. When corrupted, each head embodies the will of a select major beast within Lore), Fusionism (Fused three timelines together rather than destroying them), possesses all of Hero of Lore (AQ) and Hero of Lore (Dragon Fable)'s abilities.

Attack Potency: Likely Multi-Solar System level (Defeated Iadoa and Chaos Champion Drakath) | Unknown (Traded blows with Karok the Fallen and Kezeroth the World Ender. Supposedly killed the Queen of Monsters according to Malgor, but the credibility and details remain unknown) | Unknown (Defeated all 7 Deadly Dragons which embody the 7 vices) | Unknown | Universe level+ (Defeated Mors Temporis and stopped and destroyed the Vorefax which was going to devour the timeline) | Multiverse level (Merged three timelines together to form the AdventureQuest Worlds timeline. If a certain incantation is not spoken within 10 years, the Eternal Dragon of Time will grow the heads of 6 great monsters within the history of Lore and will stop at nothing to destroy the world, universe, and eventually the multiverse, which contains a nearly infinite amount of universes and possibly up to 5 dimensions)

Speed: Unknown (Flew from the Underworld to Chaos Portal on the top of Mount DoomSkull within seconds) | Immeasurable. Likely Omnipresent within Lore

Stamina: Extremely High (Can dispatch large amounts of enemies without tiring), Limitless as the Eternal Dragon of Time

Range: Standard melee range with weapons, Unknown with magic (assisted in lifting the Shadowfall Fortress from the Underworld) | Multiversal

Standard Equipment: A weapon, class, and a set of armor

Intelligence: Varies from Average to High, Nigh-Omniscient as the Eternal Dragon of Time

Weaknesses: Can sometimes be a bit accident-prone and absent-minded, can be rather cocky and is rather gullible.

Retrieved from "https://vsbattles.fandom.com/wiki/Hero_of_Lore_(AQW)?oldid=5499534"
Community content is available under CC-BY-SA unless otherwise noted.