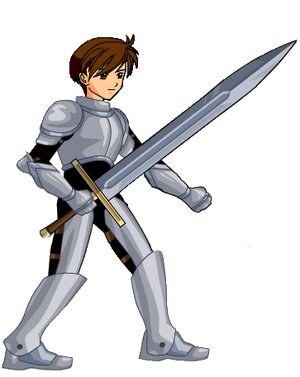 The Hero of Lore is whoever they need to be to save the day. They are the main character of Adventure Quest, and ends up playing the role of protagonist.

Name: Varies (Decided by the player), The Chosen

Attack Potency: Wall level, likely higher (Consistently defeats and kills various dragons, the smaller of which are still able to eat an armored soldier with ease) | Island level (Able to harm and survive blows from Carnax, who is not only mountain-sized, but has casually destroyed an entire island in the past) | At least Island level (Should be just as strong as before), possibly Planet level (With the help of many others, managed to collectively defeat The'Galin who was repeatedly stated to have the ability to destroy the entire planet of Lore) | At least Island level (Defeated Absolix), possibly Planet level (Should be as strong as previously) | Likely Universe level+ (Able to temporarily hold back Erebus) | Likely Universe level+ (Defeated SeekRat who was stated by Erebus to supposedly be a far greater threat than himself) | Unknown

Speed: At least Relativistic (Is able to dodge most attacks and spells that exist, including ones capable of manipulating or generating light based attacks in a plethora of ways, be it from the sun or from magic), likely higher (Could repel basic attacks from Erebus).

Standard Equipment: Typically varies from playthrough, but most heroes eventually end up finding themselves wielding the Blade of Awe among hundreds of elemental weapons and spells.

Intelligence: Varies from Average to High

Weaknesses: Can sometimes be a bit accident-prone and absent-minded, sometimes has elemental weaknesses depending on current equipment, can be rather cocky, is rather gullible.

Here is an exhaustive list of all the melee, ranged and magical weapons as well as spells within Adventure Quest, all of which the Hero of Lore has access to and the ability to use in any key.

Start a Discussion Discussions about Hero of Lore (AQ)