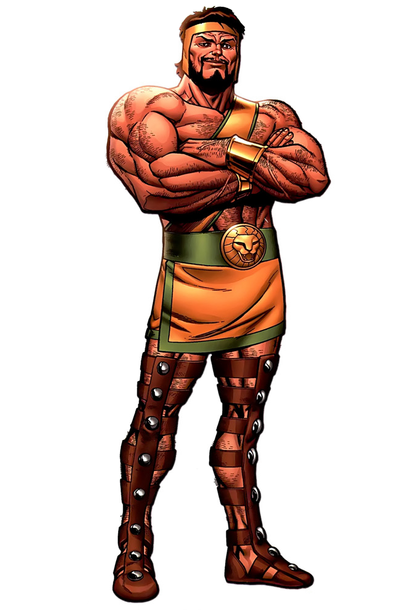 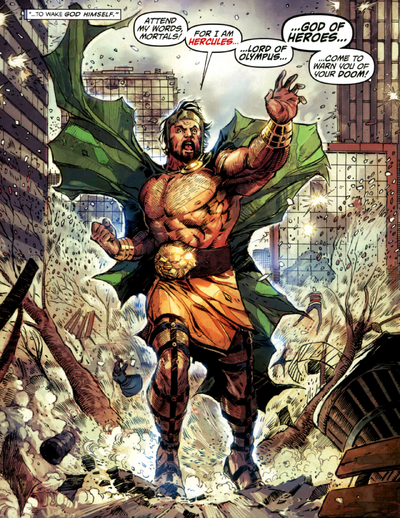 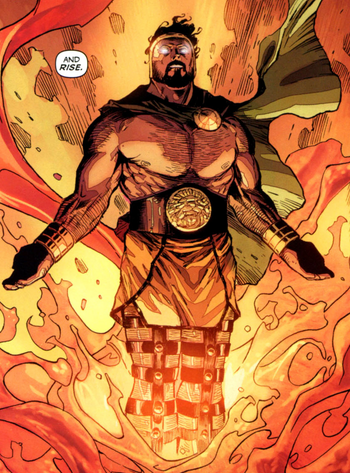 Born to a mortal women, Hercules is the son of Zeus, and spent centuries traveling the world, defeating monsters and helping the other heroes of Greece, such as Theseus and Jason. And in modern times, Hercules's role isn't much different, helping the heroes of today to battle villains as one of the most iconic members of The Avengers.

Powers and Abilities: Superhuman Physical Characteristics, Immortality (Types 1 and 4), Regeneration (Mid-Low overtime), Self-Sustenance (Type 1), Weapon Mastery (Expert Mace User and Archer), Extrasensory Perception (Can listen to any prayer), Social Influencing (Can seduce others with relative ease), Air Manipulation (Extinguishes lava with a single clap), Information Analysis using a scouter-like display, Petrification using the adorned buckler, Invisibility with the Helmet of Invisibility, Electricity Manipulation with an amplified taser, Minor Fragrance Manipulation with scented grenades, Master of armed and unarmed combat including the effective martial art Pankration, Pressure Points (As shown here), and the Minoan skill of Bull Leaping. Immune to all earthly diseases and Resistance to Fear Manipulation (Overcame Nightmare's visions), Petrification (Resists Gorgon's attempts to petrify him), Poison Manipulation (Only got drunk when drinking enough tamepred alcohol to knock out an elephant and survived bullets with Hydra blood), Memory Manipulation (Resisted Iron Man's memory probe machine), Existence Erasure (Resists High Evolutionary's attempt at erasing his identity and shattering his nuclear bonds) , Madness Manipulation (Can handle power that would have driven a mortal insane in two minutes) and Limited Resistance to Paralysis Inducement (Overcame Kang's Paralysis beam through sheer strength and will), Mind Manipulation (As shown here, done with assistance of his allies) and Soul Manipulation and Empathic Manipulation (Resists Oizy's despair-inducing soul poison, though he needed assistance of others) | All the powers of a Skyfather like Odin & Zeus | The same, though on a vastly higher scale. Restored the Multiverse to what it once after the Chaos King was sealed

Attack Potency: Solar System level (Consistently shown as Thor's equal) | At least Low Multiverse level (One-shot an amped Zeus who had just no-sold an attack from Galactus. Fought the entire Council of Godheads at once and made them fear him) | Low Outerverse level (Hercules fought the Chaos King, although it was stated that he would lose, and after the fight he restored the Multiverse by sacrificing his entire power)

Speed: Massively Hypersonic (Threw the Executioner in a microsecond, resulting in this speed) | Massively FTL+ (Scaling from Odin & Zeus) | Immeasurable

Stamina: Incredibly high, can fight comparable opponents for a long time without tiring, held up the sky for Atlas for a while | Nearly endless | Infinite

Standard Equipment: His mace, the Sword of Peleus (a short blade which is very sharp and effective. It can cut through molecules and is stated to be able to cut through anything, although this is almost certainly a hyperbole).

Intelligence: Incredibly skilled in combat, both unarmed and with melee weapons, invented his own wrestling, external, millennia of battle experience, great knowledge of human anatomy, otherwise more of a brawn - over - brains kind of guy | Vast cosmic knowledge, but still somewhat foolish.

Weaknesses: Hercules is overconfident and boastful, he is easily distracted by beautiful ladies, and cannot fly | No real weaknesses