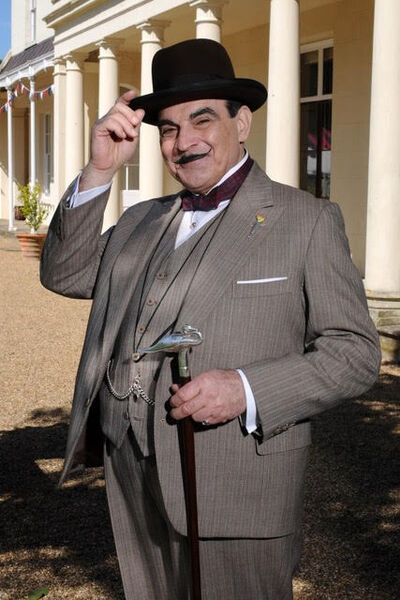 Hercule Poirot is a fictional Belgian detective featuring in many of Agatha Christie's works, famed equally for his ego, intellectual brilliance, and luxurious moustache.

Attack Potency: Athlete level with his walking stick, Street level with firearms (A notable weapon of Poirot's is the Beretta M9)

Lifting Strength: Varies from Below Average Human to Regular Human

Stamina: Low to Average. Is overweight, but still leads an active lifestyle

Range: Extended melee range physically, tens of meters with handguns (Was a member of the Belgian Police Force, so should be skilled with his weapons)

Intelligence: Genius. Poirot's trump card is his incredible intelligence. He is noted for consistently being the smartest person in any room. He is famous across Europe for his deductive skills, and with one exception, has never failed to solve a case. He is a master of human psychology, forensic sciences, fluent in up to five languages (French, English, German, Italian and possibly Flemish/Belgian Dutch) and has a passing knowledge of another three (Russian, Arabic, and Greek). He also possesses a wealth of general knowledge.

Weaknesses: Severely egotistical, vain, narcissistic and has a flair for the dramatic