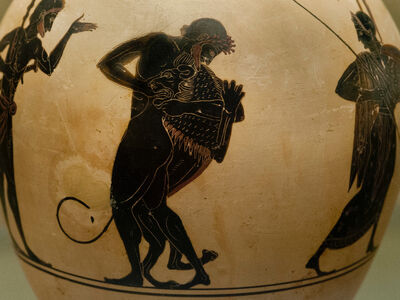 Heracles, also known as Hercules in Roman Mythology is a classical hero character found in Greek and Roman Myths. His more popular tales involve the hero being enchanted into madness by Hera and killing his family, whereupon he undertook a series of tasks from Eurystheus, who became king in Heracles's place in order to purify his sin. This included killing/capturing mythical beasts such as the Nemean Lion, Hydra, and Cerberus, as well as other tasks such as stealing the Golden Apple and cleaning the Augean stables.

After completing all labors and then some, he would go on to perform various other deeds in his life such as partaking in an adventure with the Argonauts, eventually dying and becoming one amongst the Greek/Roman Pantheon.

Powers and Abilities: Superhuman Physical Characteristics, Expert Hand-to-Hand Combatant, Weapon Mastery, Invulnerability with the Nemean Lion´s pelt, Resistance to Death Manipulation (Fought off Thanatos, the personification of death) | Same as before but on a stronger level plus Immortality (Types 1 and 5), Flight, Teleportation, Matter Manipulation, Reality Warping, Resistance to Soul Manipulation (The mortal part of his soul resides in the underworld)

Attack Potency: Island level (Made the Strait of Gibraltar, Killed most of the Gegeines, the six-armed giants), His poisoned arrows allow him to kill people with higher durability (Hydra poison inflicts so much agony that it led an immortal like Chiron to forsake his immortality to be rid of it) | High Universe level (Powerscaling from other Olympians)

Speed: Subsonic movement (Outran a bull. Managed to keep up with a fawn. Caught the golden hind which is said to be faster than an arrow) with likely Massively Hypersonic reactions (Managed to react to Apollo who can fly fast enough to travel from Greece to another continent in a few minutes. He also managed to hit the sun with an arrow, when the Earth moves at Mach 86 ) | At least Relativistic

Durability: Island level (Made the Strait of Gibraltar, Survived arm wrestling with his father who is as strong as him), he is impossible to damage via normal means due to the Nemean Lion´s armor | High Universe level

Intelligence: An incredibly accomplished warrior and hunter with decades of experience | A god with thousands of years of experience

Weaknesses: Susceptible to mental influence as he was driven insane by Hera once. Can be asphyxiated to death. His arrows can be used against him. Heracles is often conquered by his own desire.