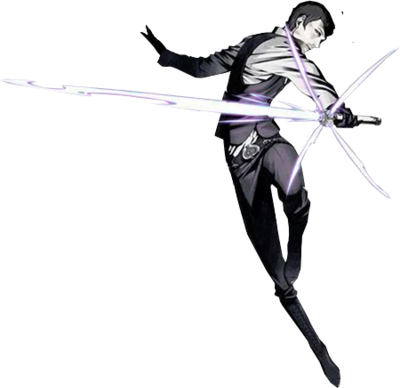 Henry Cooldown is a fictional character in the 2007 video game No More Heroes. He is a 27-year-old American assassin, who was raised in Ireland. He is Travis Touchdown's fraternal twin brother; it was unknown if his last name was also Touchdown until his full name, though never mentioned in-game, was revealed to be Henry Cooldown. To most (including Suda 51) he is known simply as Henry. He wears a full gray outfit and wields the Cross Sword, a beam katana similar to Travis' Tsubaki Mk-III.

Powers and Abilities: Superhuman Physical Characteristics, Talent in swordplay and wrestling, Energy Manipulation, Breaking the Fourth Wall (Broke the fourth wall in his fight against Travis), Resistance to Dream Manipulation (Resisted Mimmy's attempt to be with him in the dream forever)

Weaknesses: Has a slight ego, can't keep a wife

Retrieved from "https://vsbattles.fandom.com/wiki/Henry_Cooldown?oldid=4777440"
Community content is available under CC-BY-SA unless otherwise noted.