Helena Douglas (Katakana: エレナ・ダグラス, Rōmaji: Erena Dagurasu) is an opera singer and Pi Gua Quan martial artist from the Dead or Alive series, making her first debut in Dead or Alive 2. She is the current leader of DOATEC, and the illegitimate daughter of the late Fame Douglas, the former head of the DOATEC, and Maria. She is also the half-sister of Kokoro.

Helena enters the Dead or Alive Tournament to find the assassin who killed her mother. Although she was being manipulated by Victor Donovan, she ends up inheriting control of DOATEC after her father’s death.

Helena is the main protagonist of Dead or Alive 4. She was the winner of the fourth Dead or Alive Tournament, but gave the title to Zack.

Stamina: High (Is a skilled martial artist capable of fighting for long periods of time without tiring)

Intelligence: Skilled combatant and martial artist, is the current leader of her father's company

Bokuho: Helena goes into a low stance where she performs a lot of her combo attacks. She also uses this stance to duck high strikes.

Renkan-Kasui-Sho: Triple strike with a powerful palm thrust that sends the opponent flying.

Renkan-Kosen-Tai: Double quick strike into a powerful kick to the head.

Tanheki-Sen-Kyaku: Quick double strike into a leg kick which puts her in Bokuho stance.

Hiko, Rensho-Soshu: double jab into a sweeping arm strike finished with a low sweep with her hand.

1-2-3-Sho: Helena does a triple lightning quick hand strikes into a throw.

ika-Bosento: Helena performs a throw with her back turned to her opponent.

Tsuten-Sho: In Bokuho helena launches the opponent in the air with a throw.

Renkan-Choho-Uryu-Banda: Back turned, she does turns her body slightly to do a triple chop into a jumping windmill putting her in Bokuho stance.

Horen-Sho-Koshutai: Back turned, she does a double chop into a back powerful kick that launches her opponent.

Kasei-Kikyaku: In Bokuho, helena does a jumping upward kick which launches the opponent.

Enbu-Kyaku: Helena does a spinning powerful head kick which closes the gap quickly and sends the opponent flying. 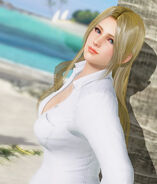 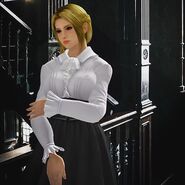