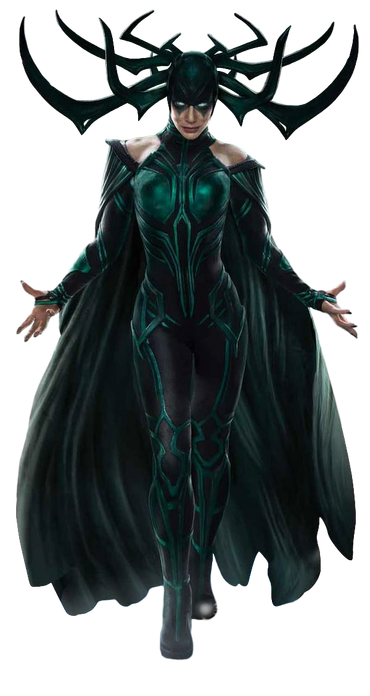 Hela Odinsdottir was the Asgardian Goddess of Death and former Executioner of Asgard. Imprisoned in Hel for millennia by her father Odin, Hela was released from her prison in the wake of his death and went to restore her power over Asgard, while simultaneously engaging in a series of encounters with her younger brothers Thor and Loki. Gaining her power from Asgard, Hela planned to rule Asgard and create an Asgardian Empire. When all the people of Asgard refused to bow to her, Hela set about massacring Odin's armies and enslaving the people, while recruiting Skurge to be her own Executioner in the process. Eventually however, Thor returned with the newly formed Revengers and then reengaged Hela, which had then resulted in Loki unleashing Surtur, who then destroyed Asgard by finally causing Ragnarök and killed Hela as a result.

Tier: At least 7-B, likely higher

Age: Over 5000 years old chronologically, possibly around 2695 years old biologically at the time of her death (Did not age when being imprisoned by Odin)

Classification: Asgardian, Goddess of Death, Daughter of Odin, Sister of Thor, Chief of the Legion of Asgard, Executioner of Asgard, Princess of Asgard, Queen of Asgard

Powers and Abilities: Superhuman Physical Characteristics, Self-Sustenance (Type 1), Longevity (Being an Asgardian, can live for around 5000 years), Portal Creation, Regeneration (At least Mid-Low. Instantly healed after being stabbed by an Einherjar's sword, Gungnir and Dragonfang), Weapon Mastery, Martial Arts (Even superior to Valkyrie and Thor), Master Acrobat, Statistics Amplification (Her power increased and she grew younger as she stayed in Asgard), Necromancy (With the Eternal Flame), Earth Manipulation (Can manipulate Asgard's ground and generate large spiked structures), Limited Telekinesis (Can manipulate her weapons to an extent), Weapon Creation and Limited Matter Creation (Able to manifest an extremely high number of incredibly sharp and durable weapons known as Necroswords from her body. Can also materialize her helmet, her clothes and create shields), Levitation, Danmaku, Resistance to Electricity Manipulation (Almost unaffected by Thor's lightning) and Heat Manipulation (Survived falling in a fissure created by Surtur, unharmed by holding the Eternal Flame in her hand), Extreme Pain Tolerance

Attack Potency: At least City level (Destroyed the floor of Asgard's palace, the floor being durable enough to withstand Gungnir taps powerful enough to shake the entire Asgard. Effortlessly cleaved through Thor's flesh and armor. Knocked out Awakened Thor twice, and badly injured him and Valkyrie. Slammed Thor through Bifrost's shards when weakened, breaking them. Cut through Skurge's armor, and crushed Mjolnir with one hand, which are both made of Uru. Fought with Odin in his prime, who could not stop her and resorted to imprisoning her with his magic instead), likely higher (Was almost comparable to peak Odin at her prime. Was termed by Odin to have "limitless" power, and was even afraid of her. Drew blood from Surtur when he had just obtained the Eternal Flame. Termed the Casket of Ancient Winters as "weak", which can freeze horizon-spanning landscapes near instantly. Uru is made up of Neutron Star Material)

Speed: Subsonic movement speed (Ran at speeds comparable to Awakened Thor. Quickly ran a large distance on the Bifrost Bridge. Can jump huge distances) with Massively Hypersonic combat, reaction and attack speed (Far superior to base Thor. Blocked Thor's lightning. Effortlessly caught a knife thrown by Loki, and threw it back at him much faster. Reacted to fire from Asgardian airships. Reacted to Thor's cloud to ground lightning. Easily dodged lightning channelled by Thor's swords. Reacted to Mjolnir being thrown at her with ease. Swiftly leapt into the light of the Bifrost. Shot her sword before Thor charged himself with lightning)

Lifting Strength: At least Class T (Held Mjolnir in air and prevented it from returning to Thor when severely weakened, where Thor can shake a mountain by just dropping Mjolnir on it. Casually crushed Mjolnir. Put Thor in a chokehold with one hand which he couldn't free even using both hands, also when she was weakened. Casually crushed an armored Asgardian soldier's head with one hand)

Durability: At least City level (Easily caught Mjolnir with one hand while weakened. Endured attacks from awakened Thor. Withstood Thor's most prolonged lightning attack. Shrugged off bullets from Asgardian airships. Easily blocked a full powered hit from Thor using Gungnir, even though he was capable of shaking the entire Asgard by just tapping it on the floor. Withstood a full force lightning attack from Awakened Thor that even destroyed a portion of the Bifrost Bridge, while she was already impaled by Dragonfang. Was powerful enough for Odin to not be able to kill her), likely higher. Higher with shields, bracelets and helmet (Is made of the same material than makes up her blades and is durable enough to withstand hits from Gungnir, and Dragonfang, both of which managed to pierce her torso)

Standard Equipment: Can manifest any weapon from her body- Necroswords, her helmet, daggers, spears, shields and the Bloodaxe. Mjolnir (formerly), the Eternal Flame

Intelligence: Highly skilled fighter (Single-handedly slaughtered the Valkyries, fought with Thor and Valkyrie at the same time) and possesses some arcane knowledge about mystical artifacts. Excellent leader and conquered the Nine Realms along with Odin

Weaknesses: The source of her power is connected to Asgard and only gets stronger the closer she is to it, would only die if Asgard is destroyed in Ragnarök. Her powers can be supressed by Odin's magic.