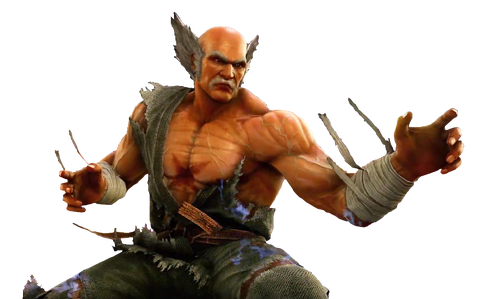 Heihachi Mishima (roughly translates to "Eighth Peace of the Third Island") is a fictional Japanese character in the Tekken fighting game series. He is the son of Jinpachi Mishima, the father of Kazuya Mishima and Lars Alexandersson, the adopted father of Lee Chaolan and the grandfather of Jin Kazama.

Heihachi tossed his son down a deep ravine, thinking that if he inherited the cursed blood of his mother, he'd be able to survive the fall and climb back up. To further motivate Kazuya, Heihachi adopted a Chinese orphan named Lee Chaolan and raised him as a rival to his true son. Eventually, Heihachi decided it was time to test his son's strength, and he announced the King of Iron Fist Tournament.

Attack Potency: Country level, possibly Multi-Continent level (Together with Akuma, defeated squads of Jack 6 and one-shot them with ease, a single Jack 6 is able to perform this feat, also clashed three times with Kazuya so far and is comparable to Jin) | Large Country level, possibly Multi-Continent level (Managed to revert True Devil Kazuya into his human form)

Speed: Sub-Relativistic (Reacted to Devil Kazumi laser beam after their battle, which is this fast) | Relativistic (Kept up with True Devil Kazuya in battle)

Lifting Strength: Class 100 (Is physically stronger than characters comparable to Raven, which can pick up and throw objects weighing over 80 tons with ease, and is on par with fighters like Kazuya) | Class K

Stamina: Very high. He is a martial arts master.

Standard Equipment: He previously used a gun to try to kill Jin, none notable otherwise. 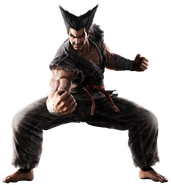 Heihachi outfit when he infiltrated the Mishima Zaibatsu.

Heihachi outfit when he regained control of the Mishima Zaibatsu.
Add a photo to this gallery