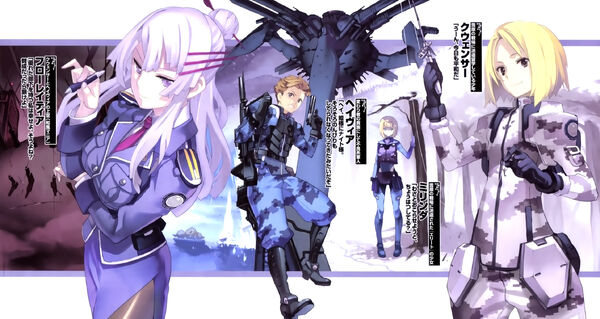 For detailed information about this series, visit the Heavy Object Wiki.

In the future, the development of massive war machines called Objects have rendered conventional warfare and even tactical nuclear weapons seemingly obsolete. As a consequence of this military upheaval, all of the nations of the world have fractured into four coalitions which constantly wage war on each other. With the perception that only Objects can destroy Objects, modern warfare is reduced to duels between Objects, resulting in shorter, cleaner, and safer wars. However, this all changes when two regular soldiers, Quenser Barbotage and Heivia Winchell, use their smarts and ingenuity to destroy an Object all by themselves. Having proven that Objects can, in fact, be defeated by conventional means, Quenser and Heivia are thrown into a new world of harrowing adventures and dangerous suicide missions.

The center of the verse's fighting power are the Objects. They possess City level Attack Potency and Durability, as they are capable of tanking several point-blank nukes and continue fighting, but they can reliably pierce each other's armor with their main cannons. They have Subsonic speed, but they can hit much faster targets with their guns, being able to easily intercept supersonic fighters and missiles.

The human characters are mostly on the level of real world humans, with Elites being slightly superhuman. Though mostly focused on piloting, they display heightened reflexes/reactions and enhanced mental capabilities.

Here is an explanation blog for the series.