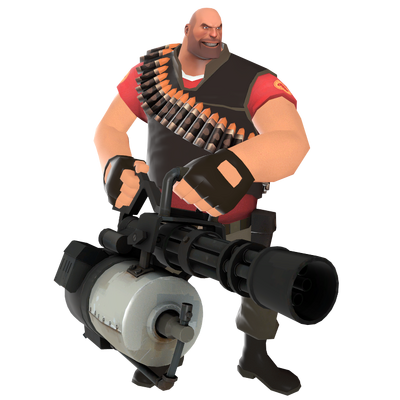 Like a hibernating bear, the Heavy appears to be a gentle giant. Also like a bear, confusing his deliberate, sleepy demeanor with gentleness will get you ripped limb from limb. Though he speaks simply and moves with an economy of energy that's often confused with napping, the Heavy isn't dumb; He's not your big friend and he generally wishes that you would just shut up before he has to make you shut up.

He is one of the defense classes in Team Fortress 2, his job is to mow down as many attackers as he can while taking fire.

Powers and Abilities: Superhuman Physical Characteristics, Expert with miniguns and shotguns, Skilled Boxer, Regeneration and Healing (Mid-Low, via Sandvich and other consumables), Can shoot an invisible bullet by pointing with his fingers, Status Effect Inducement, Statistics Reduction (Via Natascha), Statistics Amplification and Damage Boost (Via Dalokohs Bar and Buffalo Steak Sandvich), Damage Reduction (via Fists of Steel), Empathic Manipulation (via the Holiday Punch), Fire Manipulation (via the Huo-Long Heater) Transmutation (via the Saxxy and Golden Frying Pan), Immunity to Soul Manipulation due to the Medic surgically implanting himself with every other mercenary's soul

Attack Potency: At least Small Building level (Proved to be just as strong as Saxton Hale, albeit when he was past his prime. His Minigun is able to mow down an entire horde of Soldiers in Meet the Medic. Broke the spine of a Soldier, Can mow down dozens of robots when his minigun is upgraded, can destroy tanks and defeat bosses like "Sir Nukesalot", superior to his previous self without upgrades)

Speed: Subsonic with likely Subsonic+(While the slowest of the mercenaries he is still capable of combating them and tracking their movements, such as with Sniper. Fought off a BLU attack in Meet the Heavy) to Supersonic (When he's firing his guns) combat speeds

Lifting Strength: Likely Class 5 (He can lift a brown bear that is of much greater size than himself, and could briefly tug of war with Saxton Hale, albeit a Hale out of his prime.)

Striking Strength: At least Small Building Class (He and his family can wrestle bears so casually that they complain about having to eat bear meat too often, his fists should be able to strike as hard as the melee weaponry of the other mercenaries, such as Soldier's shovel)

Durability: At least Small Building level (Can take multiple grenades head on and survive, is also the most durable of the classes. Survived being shot with rockets, Mini-guns, grenades, and shotguns w/o problem)

Stamina: Superhuman (Wrestling bears in the harsh snow mountain environment and constantly winning), can increase temporarily with the Dalokohs Bar.

Range: Melee with fists, Up to dozens of meters with Minigun and shotguns.

Standard Equipment: A full list of his weapons can be found here.

Intelligence: Surprisingly quite high, possesses a Ph.D. in Russian literature and claims that "it has more uses in his line of work than you would think". It's been implied that the only reason the Heavy comes off as dimwitted is because he is not very proficient in English.

Weaknesses: He is short-tempered, notably slow when his minigun is spun up | The upgrades make his mini-gun consume much more ammunition than normal, running out of it faster.

Meet the Heavy
Add a photo to this gallery