VS Battles Wiki
Register
Don't have an account?
Sign In
Advertisement
in: Tier 8, Tier High 8-C, Tier 4,
and 53 more 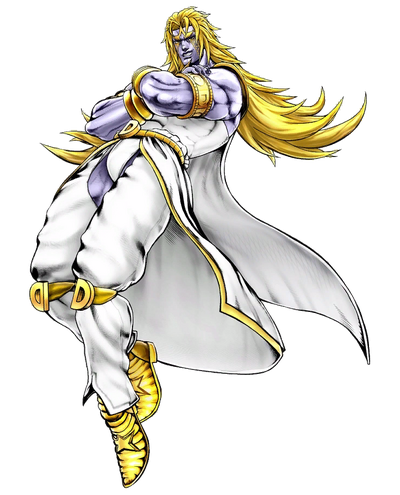 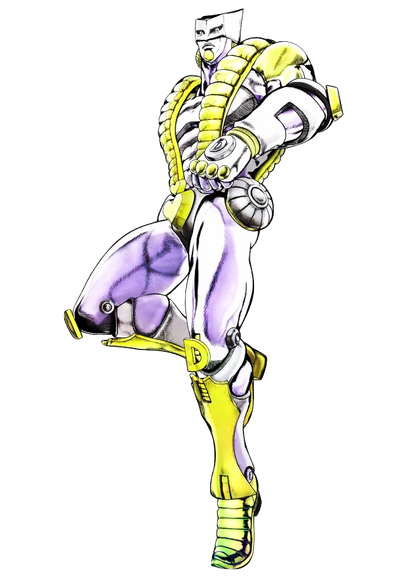 Heaven Ascension DIO is the main antagonist of JoJo's Bizarre Adventure: Eyes of Heaven. In an alternate timeline outside of the canon series, DIO is successful in killing the Joestars. He then proceeds with his plan of achieving Heaven and unlocks godly powers with his new Stand: The World Over Heaven. With his new abilities, he begins to create anomalies all over previous and future timelines, both from his own universe and from other universes. His plan is to conquer the Joestars over every possible universe and create a truly ideal world of his own.

Classification: Vampire, Stand User, The Noble One (By his followers)

Superhuman Physical Characteristics, Enhanced Senses, Has all of the abilities from his canon counterpart, Can cast Lightning Bolts, Teleportation, Immortality (Types 1, 2 & 3), Enhanced Regeneration (High-Mid [should be the same as his canon counterpart]. Can heal any injuries instantly with TWOH, albeit this has to be done manually by hand), Time Stop (Can stop time via The World Over Heaven), Corruption (Type 1), Power Bestowal (Grants the ability to travel through Parallel Universes and through Time to anyone he corrupts), Time Travel, Soul Manipulation (Can steal souls and make them his slaves as well as absorb them to further increase his power), Reality Overwrite, Existence Erasure, Power Nullification (Allows Heaven DIO to turn whatever he wishes into reality, being able to use it to overwrite/warp people and things out of existence in any dimension by touching them, as well as nullifying attacks, like GER and Tusk Act 4. A Valentine after he obtained Love Train said that he would have not been able to stop him even if he had had the full Holy Corpse), Can resurrect the dead, Pocket Reality Manipulation (Created the Over Heaven Area), Dimensional Travel (Can arrive at any reality he wishes), Biological Manipulation (Shown here), BFR (Through Teleportation and Time Travel), Technology Manipulation (Shown here), Creation (He created the Over Heaven Area), Summoning (Can summon some sort of Purple Aura to attack his enemies. Able to summons his minions, like Enya the Hag). The Corpse Parts (even if he misses one of them) give to him these abilities: Clairvoyance (as shown here), Telepathy, Spatial Manipulation (Warped space), Resistance to Transmutation, Disease Manipulation and Mind Manipulation (The Holy Corpse allows the holders to resist Scary Monsters and similar abilities)

Same powers as before, alongside with the powers and resistances of the Complete Holy Corpse (As Dio absorbed it, he should be able to use its powers as his), Weapon Creation & Homing Attack (Shown here), Corruption (Type 2), Air Manipulation and Status Effect Inducement with Tornado (Can use a tornado that blinds the opponent for 11 seconds if it hits them), Telekinesis (Can levitate), enhanced Reality Overwrite, Existence Erasure, and Power Nullification (His Reality Overwrite is superior to before and can overwrite things without touching them) and possibly Fate Manipulation (Scaling from Jotaro's Reality-Warping powers)

Durability: At least Large Building level (Survived a direct punch from Star Platinum to the head, although he had to heal from it afterwards); Regeneration and Immortality makes him difficult to kill (The main timeline DIO's bracelets were used to cause a paradox on Heaven DIO's arms, but they were still healing afterwards). At least Large Building level+, likely far higher with The World Over Heaven

Range: Standard melee range physically, 10 meters with The World Over Heaven (The farther away it gets from DIO the weaker it gets), Tens of meters when casting thunderbolts, Multiversal+ with Teleportation, Summoning, Soul Manipulation and Absorption, BFR and Reality Overwrite (Can erase a target from any dimension by touching them and overwriting them and arrive at any reality he wishes when there are an infinite amount of them)

Standard Equipment: The World Over Heaven

Weaknesses: He is not immune to paradoxical damage. Heaven DIO's powers come from his hands and fists; Should they get wounded or injured in any way, DIO will not be able to overwrite reality until they heal. His Reality Overwrite works only on the objects The World Over Heaven physically touches. | As before, but he doesn't need to physically touch targets

Note: Although DIO countered Gold Experience Requiem's Return to Zero, it's not clear if he nullified it before its activation, in the moment it was activated, or after it, and other characters and Stands could react to and match The World Over Heaven's speed, with Star Platinum even landing a blow at DIO before he could defend himself.

Asriel Dreemurr (Undertale) Asriel's Profile (Both were Low 2-C, speed was equalized, the battle took place in Madness Combat Nevada and both started at several metres from each other)