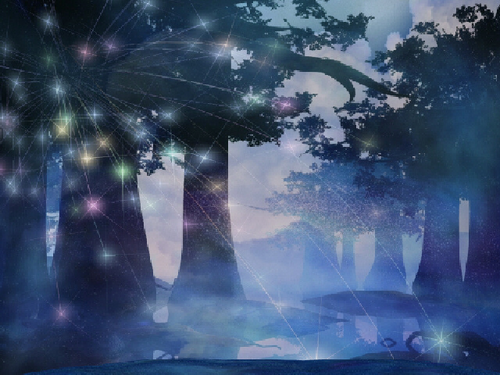 Heaven is an extradimensional space created from sheer holy magic by Goddess Ilias. It is the home of all angels and of most close allies of Ilias.

Due to Goddess Ilias' hatred of monsters, Heaven has always opposed monsters, culminating in the Great Monster War. While Heaven was inferior to monster forces, Ilias' reckless behavior nearly destroyed the entire world during the war, forcing Alice I and the Six Ancestors to seal themselves away, in exchange for the safety of the world as a whole and of the remaining monsters.

As the death of many monsters would lead to the seal placed on Alice I being broken, Ilias was left unable to directly attack monsters and relied on heroes slaying the current monster lord for her instead. However, the goddess was plotting to rid the world of monsters in alternative ways in the meantime. She recruited Promestein, a heretic scientist formerly banished by Ilias herself for her studies and Black Alice, a ruthless and legendary Monster Lord supposedly slain by Heinrich in the past. Both of them would help with the "Re-Creation" of the world, which would involve the extermination of all monsters and humans, leaving the world empty and free to be repopulated by creatures designed by Ilias directly.

Kardashev Level: Likely Type VII (Can utilize chaos for various purposes, which is the force responsible for the creation of space-time itself and has shown the ability to outright erase parts of it)

Age: At least hundreds of thousands of years old

Territory: Heaven, eventually the entire Earth. Heaven has limited influence on other timelines through the reincarnation system

Superhuman Physical Characteristics, Longevity, Self-Sustenance (Type 1, 2 and 3), Non-Corporeal (Exists purely as holy magic), Possibly Nonexistent Physiology (Type 1. Holy Magic composes half of chaos, which represents the non-existent void that existed before space-time itself. Beings made out of holy magic are unable to be interacted with, even through Monster Lord’s Cruelty’s space-shattering and existence erasing effects), Immortality (Type 2 and 3, possibly 5), Higher-Dimensional Existence (Holy magic composes half of Chaos, which is the existence that spawned all of space-time from itself and has been implied to be part of space-time’s structure), Regeneration (Mid-Godly. Can regenerate from being reduced to nothingness by Angel Halo), Non-Physical Interaction (Can interact with other angels and damage ghosts. Can permanently kill other angels), Magic, Healing (Can heal themselves or others), Resurrection (Can resurrect their allies), Light Manipulation, Holy Manipulation, Power Nullification (Can nullify attempts at reflecting or absorbing attacks with all of their holy attacks), Electricity Manipulation, Hair Manipulation (Can extend and weaponize their hair), Status Effect Inducement (Can inflict various status effects), Statistics Reduction (Can negate buffs from enemies), Soul Manipulation (Can send an opponent's soul to heaven), Empathic Manipulation (Can make their allies become berserk), Air Manipulation, Statistics Amplification (Can increase various stats of their allies), Mind Manipulation (Can seduce their enemies), Spatial Manipulation, Time Manipulation (Some can erode space-time with their sheer presence), Reality Warping, Invisibility (Heaven's Gate is invisible to all beings that are not fully holy), Acausality (Type 1)

Same as previous, plus Immortality (Type 1), Time Travel (Seraphs can freely travel through space-time), Time Manipulation (Can stop time on an immeasurable scale for extended periods of time, preventing the destruction of a timeline), Absorption (Can absorb enemy health or mana), Transformation, Death Manipulation (Can cast death on many enemies), Poison Manipulation, Sleep Manipulation (Can put enemies to sleep), Empowerment (Becomes stronger in forests and cities), Summoning (Can summon reinforcements temporarily)

Same as previous, plus Abstract Existence (Type 1), Immortality (Type 8. Dependant on holy magic and chaos), Pocket Reality Manipulation (Created Heaven, which is separate from the main world), Creation, Breaking the Fourth Wall, Time Manipulation (Can reset time on an immeasurable scale), Nonexistent Physiology (Type 1), Regeneration (High-Godly. Embodies the nothingness that existed before all of space-time and most concepts and will always come back from it), Void Manipulation (Can weaponize chaos, which is nothingness itself and erases anything it enters in contact with. It can even erase ghosts and angels. Passively causes space-time to erode around themselves. Can completely erase Apoptosis like Adramelech), Chaos Manipulation (Can cause chaos in one's being, causing their cells to destroy themselves or to attack the host, as well as manipulate Chaos), Conceptual Manipulation (Type 2. Can erase abstracts like the Spirits), Information Manipulation (Can cause the local space-time to get overloaded with information, redacting speech and then erasing the surroundings), Transmutation (Continued exposure to Chaos or Apoptosis can cause the Apoptosis phenomenon in someone, turning them into an Apoptosis), Quantum Manipulation (Created the Quantum element from themselves), Darkness Manipulation, Explosion Manipulation (Can re-create the actual big bang on a smaller scale), Teleportation, Power Nullification (Can instantly seal skills with a gaze), Fear Manipulation (Can stun opponents in fear), Smoke Manipulation (Can blind opponents with ink), Breath Attack, Corrosion Inducement (Can cause their enemy's body to get partially digested), Plant Manipulation, Gravity Manipulation (Can increases gravity to crush opponents), Resistance Negation (Can nullify resistances and immunities through Etermal attacks), Biological Manipulation (Can increases someone's metabolism to the point of destroying them from the inside), Petrification (Can petrify her enemies through certain attacks), Attack Reflection (Can reflect magical attacks back at the users), BFR (Can warp an opponent across space, killing them instantly), Size Manipulation (Can shrink enemies at will), Absorption (On a higher scale than before. Can completely absorb any beings, even angels and abstracts), Enhanced Senses (Can detect any disturbances within the wind, down to the smallest insect moving), Precognition (Grandine allows them to detect any disturbances in the universe’s flow and to automatically reacts to them. Mere bloodlust can affect the universe’s flow, allowing them to detect it), Cosmic Awareness (Can react to the White Rabbit despite being only a fragment of the past, unable to react to time travellers like the White Rabbit), Large Size (Type 0, eventually Type 5)

Void Manipulation (Can weaponize chaos, which is nothingness itself and erases anything it enters in contact with. It can even erase ghosts and angels), Chaos Manipulation, Conceptual Manipulation (Type 2. Can erase abstracts like the Spirits. Created the Four Artifical Spirits and planned to destroy the four original ones), Information Manipulation (Can cause the local space-time to get overloaded with information, redacting speech and then erasing the surroundings), Sealing (Can seal even Goddesses like Ilias with the Six Ancestor’s Great Seal. Sealed the Four Spirits away), Power Nullification (Can potentially nullify all angels’ non-corporeality), Transformation (White Rabbit can transform the users into stronger forms), Biological Manipulation, Cyborgization, Invisibility (Heaven and the Gate to Heaven are all invisible to non-holy beings), Necromancy (Can bring back corpses to life), Resurrection (Responsible for the resurrection system), Soul Manipulation (Can seal souls away)

Industrial Capacity: Capable of producing over 400 million replicants in a short amount of time and had enough chimeras to overrun all the countries of the world down to the smallest village in less than 30 years

Weaknesses: A lot of its members are highly individualistic and work for their own ends rather than for the benefit of the organization. This is especially true for Black Alice and the Seekers of Truth.

Note: This profile only covers Heaven during the events of the original trilogy, as Heaven does not appear in the Paradox Timeline and is drastically different in other timelines

Path to the Navel of the World

Navel of the World
Add a photo to this gallery

Retrieved from "https://vsbattles.fandom.com/wiki/Heaven_(Monster_Girl_Quest!)?oldid=5942642"
Community content is available under CC-BY-SA unless otherwise noted.