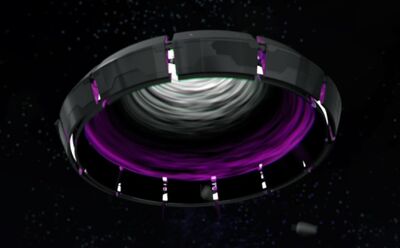 The Heart of Darkness is a black hole generator created by Professor Zayton Honeycutt as a power source. He sold it to Kraang Subprime for a large payment, who subsequently had the Kraang use it to destroy the Triceraton Homeworld. The surviving Triceratons then took the technology for their own to be used against the Kraang.

Material or Element: A power source

Needed Prerequisite for Use: It has to be activated on the first place (it can be deactivated)

Attack Potency: Planet level, likely higher (The black hole took 2 minutes to swallow Earth, and imploded shortly after, destroying any remnants of "anything" being there)

Earth being swallowed by The Heart of Darkness after activating
Add a photo to this gallery
Retrieved from "https://vsbattles.fandom.com/wiki/Heart_of_Darkness?oldid=5961685"
Community content is available under CC-BY-SA unless otherwise noted.