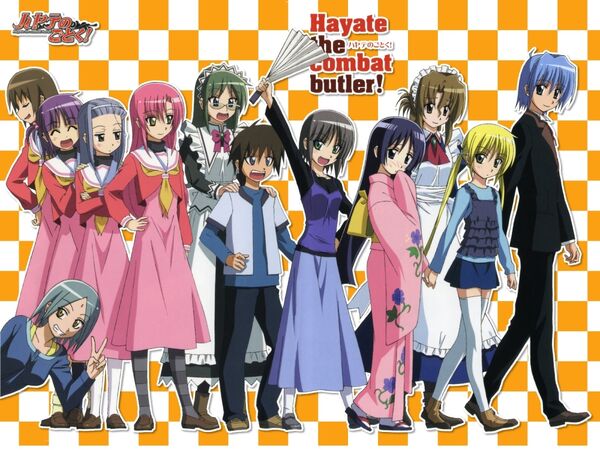 For detailed information about this series, visit the Hayate The Combat Butler Wiki.

Hayate the Combat Butler, known in Japan as Hayate no Gotoku! (ハヤテのごとく!), is a comedy shounen manga series created by the mangaka Kenjiro Hata. It ran from 2004 to 2017 in the Weekly Shonen Sunday magazine for a total of 568 chapters. Although not too well known in the west, it does have a decent following in Asia and has been adapted into an anime series with four seasons, an anime movie, a series of OVAs, a light novel, even a hit Taiwanese live action television series.

The story follows 16-year-old Hayate Ayasaki after he is abandoned by his gambling addict parents and left with a 156,804,000 Yen debt. After this abandonment, a strange series of events and misunderstandings sees Hayate being chased by loan shark yakuza hell-bent on selling his internal organs in order to clear the debt, attempting to kidnap a young girl for ransom, getting run over, then rescuing the very girl he tried to kidnap. The girl in question turns out to be the 13-year-old heiress of the incredibly wealthy and influential Sanzenin family. Infatuated with Hayate and impressed with his superhuman skills, she ends up hiring him as her butler. The story from then on focuses on Hayate as he works as a Sanzenin “Combat Butler” whose duties include caring for his mistress, protecting her from various threats, and making sure the vast Sanzenin fortune does not fall into the wrong hands.

The series has elements of slice of life, parodies other manga/anime (such as Dragon Ball, Gundam, Detective Conan and Yu-Gi-Oh! especially) and even western fictions (such as Star Wars), has elements of romance and harem, makes fun of common shounen tropes (such as ultimate moves and transformations), and also actually makes fun of the trope of fanservice while providing fanservice. Furthermore, the narrator and many characters regularly break the fourth wall in both the manga and anime.

The series is set in a fictionalized version of real-life Japan with the main plot taking place between December 2004 and December 2005 while some pivotal events in the series take place back in 1995 to 1996. The verse does have a nice collection of superhuman characters who can mop the floor with hordes of well-armed normal human soldiers and even hordes of legendary monsters. In addition, they have access to technology and weaponry beyond anything we have in real life and there are even advanced robots who can go toe to toe with some of the strongest characters in the series. All in all, however, it is not really all that powerful a verse. The high tiers are Wall level to Small Building level while the top tiers are Small Building level to Building level. In terms of speed, the high and top tiers are Superhuman to Subsonic at best with Subsonic+ to Supersonic reactions. There are some hax abilities in the verse but nothing that could be considered “broken” or a game changer in battle.

Retrieved from "https://vsbattles.fandom.com/wiki/Hayate_the_Combat_Butler?oldid=6511044"
Community content is available under CC-BY-SA unless otherwise noted.