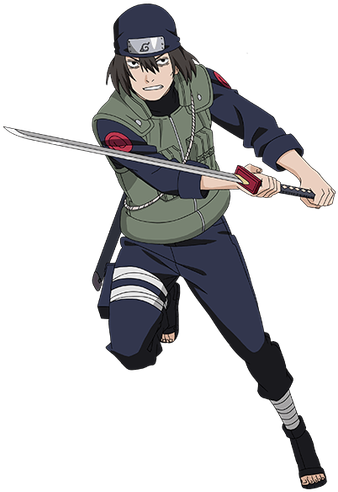 Attack Potency: Town level (Matched with Baki and damaged him)

Speed: Possibly Massively Hypersonic+ (Should be comparable to Genma)

Intelligence: High (He is considered a talented ninja by Baki, also proved to be quick thinking and a cunning strategist)

Kage Bunshin no Jutsu (Shadow Clone): Creates a clone(s) of the user able to perform techniques and interact with the environment due to it having physical substance; and also evenly distributes the user's chakra to each clone. If the clone is injured, the clone will disperse.

Dance of the Crescent Moon: The user and two of their shadow clones attack a target from different directions with a bladed weapon. As they move towards their target, the attackers usually leap through the air in a formation reminiscent of the crescent moon, hence the name. Because all three attacks are meant to simultaneously come from a blindspot, targets can't reasonably defend against all of them. Moreover, because of the power behind the strikes, if even one of them lands successfully, the target is likely to be fatally wounded.

Retrieved from "https://vsbattles.fandom.com/wiki/Hayate_Gekko?oldid=6065110"
Community content is available under CC-BY-SA unless otherwise noted.