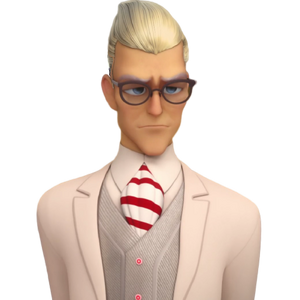 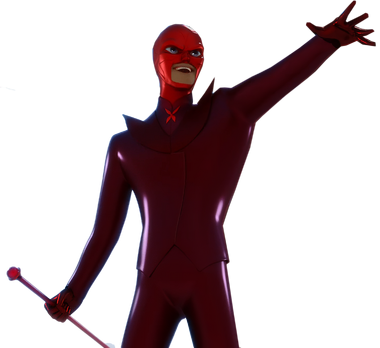 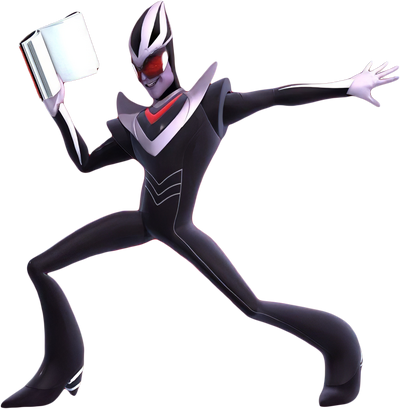 Gabriel Agreste is Adrien's father and a famous fashion designer, creating and owning the brand Gabriel. With the Moth Miraculous, when inhabited by Nooroo, he transforms into Hawk Moth (or Papillion in French). He wants Ladybug's and Cat Noir's Miraculouses for himself to obtain absolute power, and to achieve his unknown goals, he creates and controls the Akumas; white butterflies infected with evil who can transform normal people into supervillains.

Hawk Moth is cold, cunning, and determined. His goal is to claim the Ladybug and Cat Miraculous to gain their absolute power that he needs to achieve his dearest secret wish, not caring if he causes people to harm in the process. His akumatized villains are his most powerful known weapon, and he chooses his victims carefully and cleverly, usually people who are emotionally at their weakest, giving them ideas if they're struggling to think up of one. He is a great deceiver, persuading people that he cares about their problems and gives them powers to help solve them when in reality, he does it because he wants them to retrieve the Miraculouses for him. If things aren't going his way, he easily loses his patience, threatening harm to Ladybug, Cat Noir, and even to the villains he creates. After a villain's defeat, Hawk Moth determinedly vows revenge and, while stopping for a while afterward, doesn't wait too long to try again with his Akumas.

In "The Collector", to avoid suspicion of being Hawk Moth, he Akumatizes himself into the Collector, a supervillain who has the power to imprison any person or object within a magical book.

In the Season 2 finale, Hawk Moth creates a fatal plan during "The Heroes Day" and with the help of Catalyst, he empowers himself into Scarlet Moth, a form that lets Hawk Moth to send as many Akumas as he wishes at the same time in order to create an army of akumatized villains.

Age: Unknown, most likely in his 40s

Superhuman Physical Characteristics, Expert Hand-to-Hand Combatant, Acrobatics, Expert Swordsman, Immortality (Type 1), Self-Sustenance (Type 2. Upscaling to Bunnyx, who spent over 5,000 years in a stone box), Akumatization (Corruption of others), Can sense emotions, Telepathy, Power Bestowal (Can grant with superpowers to those who he Akumatizes), Power Modification (Exchanged Queen Bee's Venom with the ability to command an army of Wasps which stings causes the same effect, also making its usage limitless), Limited Power Nullification (Able to take away the powers of his Akumatized villains), Mind Manipulation, Empathic Manipulation (Able to control those who he Akumatizes and twist their personalities through their negative feelings), Technological Manipulation (His Akumas could cause a blackout on an elevator. Capable of infecting artificial intelligences), Animal Manipulation (Able to transform animals belonging to the Akumatized Villain of the turn), limited Pain Manipulation (Can inflict pain in his Akumatized villains), Duplication (via Akumas), Fusionism (Able to fuse people together to create one akumatized villain, as well as fuse Akumatized villains with objects), Akuma control, Surface Scaling, Social Influencing, Transformation, Limited Telekinesis (Able to call back his Cane), Resistance to Extreme Temperatures and Cosmic Radiations (Miraculous wielders can withstand temperatures approaching Absolute Zero. Comparable to Snake Noir, who was unfazed after being teleported close to the sun)

All the abilities of Hawk Moth, plus some abilities are greatly enhanced, such as Akumatization and Duplication (Can send an unlimited amount of Scarlet Akumas at once, all share the same abilities as Base Akumas) Empathic Manipulation and Mind Manipulation (His Akumatization no longer needs the consent of his victims, meaning that avoiding being Akumatized with willpower is no longer possible), Social Influencing (Scarlet akumatized villains have no free will and obey Scarlet Moth without questions, while regular akumatized villains are still somewhat independent), Danmaku and Homing Attack with Scarlet Akumas (Can surround his victims with a swarm of Scarlet Akumas that would infect his foe at the sight of a negative emotion)

Superhuman Physical Characteristics, Immortality (Type 6), Skilled Hand-to-Hand Combatant, Acrobatics, Sealing, Paper Manipulation, Dimensional Storage, BFR (Can trap others' and objects in his notebook when in contact); Duplication, Paralysis Inducement, Power Bestowal, Possession, Corruption and Mind Manipulation (If his Akuma isn't purified after being defeated, it would start to multiply into many more Akumas and infect different persons, turning them into Collectors that would remain immobile until Gabriel gets Re-Akumatized)

Stamina: High (Should be comparable to Adrien) | Superhuman (Comparable to Ladybug and Cat Noir)

Weaknesses: Can only send out one Akuma at a time. He uses his akumatized villains to fight for his goals, rather than himself. If his victim isn't despaired enough, the Akuma may be unable to infect it or even allow the host to refuse Akumatization | His Akumatizations still need negative emotions to infect the victims. If his cane is destroyed, he'll de-power back to his base form | His notebook has a limited amount of pages, and if all the pages are full, it will no longer work. If his Notebook is destroyed, he will lose her powers. If his Akuma is purified after being defeated he won't be able to duplicate.

Akumatization: Hawk Moth's main superpower is Akumatization. He can corrupt butterflies with dark energy, which transforms them into Akumas. He sends them out to possess an object of a vulnerable person, and then after they agree to serve him, he transforms them into supervillains, corrupting their personalities and granting them a wide variety of superpowers and abilities. He can also telepathically communicate with his creations, and when he does so, a pink butterfly-shaped outline appears in front of his and the villains' faces. He can feel negative emotions like an empath, and he can precisely pinpoint the person's name and the reason why they're upset.

These powers do have their limitations, however. He is only able to send one Akuma at a time (However, he's able to create multiple Akumatized villains through a single Akuma) for an indeterminate amount of time (The record being months). He needs to convince his victims to accept the powers that he grants, and the akumatized supervillains that he creates — while corrupted — do still have a will of their own and can either disobey or carry out his orders incompetently. Another limitation is that Hawk Moth only has a limited range to control and communicate with the Akuma or his akumatized villains, and will lose connection to them if they get too far from him. For a brief amount of time, however, he can control the villain's body, preventing them from doing anything. It is also shown, that the stronger the malice and negative emotions the person holds, the stronger they can be, stating that due to Audrey Bourgeois being one of the most hateful people he has met, her Akumatisation would result in 'the perfect creation'. Hawk Moth also doesn't need to stay transformed in order to keep the akumatized villain transformed, as shown in "Simon Says", "Startrain" and "Cat Blanc", but he'll lose control over the villain when he de-transforms.

When an Akuma is not cleansed by Ladybug, it will multiply and turn other people into frozen copies of the original akumatized villain. Hawk Moth can trap the original Akuma in a glass dome at the top of his cane, and he can release it again when the victim gets sad or angry once more. This turns the victim into the same akumatized villain, but it also unfreezes the copies of them, which the original villain can command and control. Hawk Moth can also control many Akumas in different shapes, to form a swarm that makes a large version of his head most notably, which he can speak through. However, once the original Akuma is de-evilized, its copies vanish, reverting the duplicates of the villain to normal.

Cane: Hawkmoth wields a Cane as his Miraculous' weapon. Despite never shown fighting, it is revealed in Robostus that Hawkmoth is a capable sword fighter on his own, who was able to react to and destroy miniature missiles in his own lair's defense protocol with a short sword that extends out of his cane.

A form bestowed to him by his akumatized villain Catalyst, Hawk Moth can turn into Scarlet Moth, turning red, as his powers are upgraded. In this form, Hawk Moth has no limit to how many Akuma's he can send out, merely giving a tap of his wand, as they seek out negative emotions and then infect whoever they touch into doing Hawk Moth's bidding. They seem to have less free will than that of their original Akumatisations, but seem to keep their powers. The Scarlet Akumas are also able to transform their victims without their consent, even though they still need negative emotions to possess their targets.

Notebook: The Collector can trap objects and people in the form of drawings inside his notebook. He throws the notebook like a boomerang, and while the notebook can go very far distances, once it captures something or someone by hitting them, it returns to him wherever he is. He can also utilize the notebook as a shield against projectiles, opening the book, either holding it sturdily or waving it around, so it traps the object being thrown towards him. Anything it passes through is trapped no matter how big it is. He has even shown to be able to trap the majority of Paris' main sights and building, and Chat Noir's staff (which has been stated to have Infinite length determined by willpower, if compared to Ladybugs Yo-yo

Note: In the episode "Mayura", it was revealed by Hawk Moth that adult Miraculous Holders, including him, can stay transformed indefinitely, and can use their superpowers unlimited amounts of time