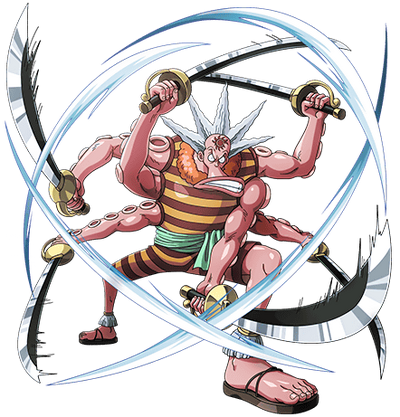 Hatchan, often called “Hachi” by most characters, is an octopus fish-man, a former officer of the Arlong Pirates and a member of the Sun Pirates before that. After the crew split up, he joined Arlong's crew and became the handler of the sea cow Momoo. When the Straw Hats came to take down Arlong, he was defeated by Zoro, and was imprisoned by the Marines. However, he managed to escape, and met the mermaid Camie and the starfish Pappag after saving them from Sea Kings and Fishman slavers. He opened up a floating takoyaki stand, fulfilling a childhood dream of his, with the mermaid and starfish occasionally helping on support.

Later on, he crossed paths with the Straw Hats once again while they were heading for Fishman Island. He revealed that he felt bad about what had happened at Arlong Park, and decided to try and make it up to them and Nami by guiding them to the Sabaody Archipelago where they could have their ship coated for the underwater journey by Silvers Rayleigh, an old friend of his from before his pirate days.

Powers and Abilities: Superhuman Physical Characteristics, Expert Swordsman, Self-Sustenance (Type 1, as a Fishman; he can breathe underwater), Statistics Amplification (Fishmen's speed gets doubled underwater), Ink Manipulation (Can shoot streams of ink from his mouth like a true octopus), Surface Scaling

Stamina: High (Able to stand on his feet after being severely injured and swim during a brief period of time).

Standard Equipment: A package of six katanas, a golden trident

Intelligence: Average. Able to use six swords at the same time with some effectiveness.