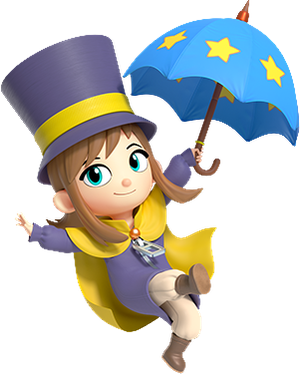 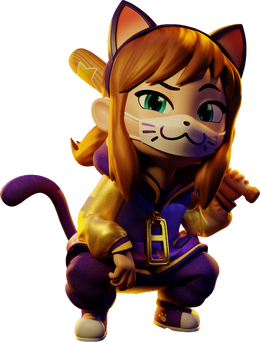 Hat Kid is the main protagonist of the game A Hat in Time. She is a time travelling explorer who wants to recover the Time Pieces of her spaceship and go home.

Tier: At least 9-B, higher with Time Pieces

Name: True name is unknown but referred as Hat Kid, Child, Kid with the hat

Attack Potency: At least Wall level (Sent a Mafia grunt flying with this much energy. Capable of blowing up crates and barrels), higher with Time Pieces

Lifting Strength: Class 5 (Can freely lift a fully grown walrus with one arm)

Striking Strength: At least Wall Class (Traded blows with foes who can harm her)

Durability: At least Wall level (Withstood hits from Mustache Girl and other opponents comparable to her)

Stamina: High (Can have long battles with The Conductor/DJ Grooves, The Snatcher and Mustache Girl)

Intelligence: Likely Above Average (Is a rather capable fighter and has shown to be able to pilot and maintain her space ship)

Weaknesses: Depends on her equipment, her hats have cooldown, a bit naive. If any of her hats were to be removed, she cannot demonstrate any of her abilities

Bender (Futurama) Bender's Profile (Speed was equalized, 9-B forms, both characters had their full arsenal)