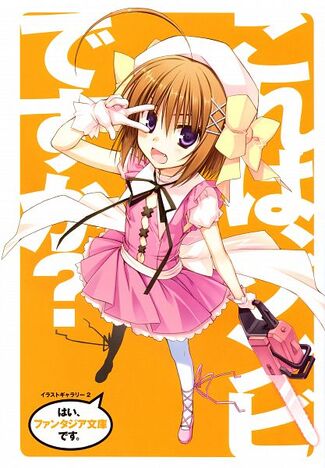 Haruna is a main character in KoreZombie. She's an inhabitant and student of the magical land of Virie, and works as a masou shoujo (=magiclad girl). She's proud, arrogant, upbeat, and usually does whatever she wants, paying no mind to others, excluding her teacher Ariel, whom she respects greatly. She's considered a genius in Virie, excelling in anything she does, having defeated hundreds of Megalo single-handedly, and able to master any unknown skill or machine within seconds. Her genius, combined with her arrogance and rudeness, has led her to have no friends, lack common sense, and try to act cool whenever she receives some attention, often leading to further isolation. After randomly meeting Ayumu Aikawa while fighting a Megalo, her magical powers seem to be "stolen" by him, though, unbeknownst to them, they were absorbed by Eucliwood Hellscythe through her connection to Ayumu. Unwilling to return home with no powers, she stays at Ayumu's place, while helping him adapt to his new role as a masou shoujo. While reluctant at first, she learns to open herself to others, and becomes friends with Ayumu, Eucliwood, Seraphim and Maelstrom.

Tier: At least 9-A, likely higher. 9-B with grenades

Attack Potency: At least Small Building level (Much stronger than Zarii, who's stronger than a non-boosted Masou-Ayumu; she one-shot a kangaroo Megalo that Ayumu could barely keep up against), likely higher. Wall level with grenades

Stamina: High; has been fighting Megalo by herself for a long time, and can do so continuously without tiring. Has never been shown out of energy except when faced with Megalo while untransformed

Intelligence: Haruna is a genius both in and out of combat. She's amongst the most skilled masou shoujos in Virie, with the highest Megalo-slaying record out of all students. She excels in anything she does, can master anything new within seconds, and can solve any arithmetic problem in an instant. Is able to understand the inner workings of any power and spell just by witnessing it once, and even deciphered how Naegleria's time-stop spell worked despite Naegleria herself, the strongest person of the Underworld, not understanding it. Has considerable experience in combat from all the Megalo she's slain, and knows what to do in any given situation

Weaknesses: Arrogant and prideful. Can only transform once per day. Extremely susceptible to fear when untransformed

Retrieved from "https://vsbattles.fandom.com/wiki/Haruna_(KoreZombie)?oldid=5576798"
Community content is available under CC-BY-SA unless otherwise noted.