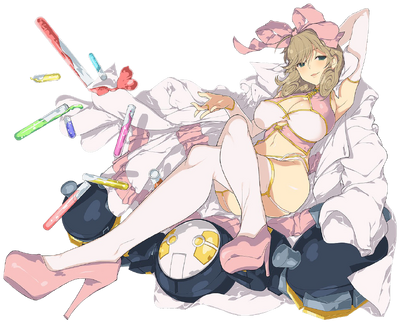 Haruka is a playable character in the Senran Kagura Nintendo 3DS series. She makes her debut in Senran Kagura Burst as a second 3rd-year student and member of the Hebijo elite before going rogue and joining the Crimson Squad.

Attack Potency: Large Building level (As a member of the Crimson Squad and of Hebijo Academy's former Elites, she should be comparable if not stronger than Homura and Hikage. Constantly fights other powerful shinobi such as Hibari, Naraku, Homura and Ryona), higher with Frantic Mode

Speed: Supersonic (Should be comparable to Hikage)

Stamina: High (Mostly due to her training as a shinobi and a renegade. Attended Hebijo Academy where students reportedly train for over 300 hours at a time)

Range: Melee range with puppets and skills and several tens of meters with her strongest Ninja Arts.

Intelligence: Scientific genius (She has made potions that grow people to enormous size, change their voices, turn them into raging masochists, give them an uncontrollable urge to dance, and more. She also created her robot sidekick). She is a highly skilled and experienced fighter as an elite Hebijo Academy shinobi and Crimson Squad renegade shinobi. She is also a master of the silver tongue, able to manipulate even the smartest and most collected of her peers and even teachers.

Weaknesses: As a sadist, she does seem to enjoy causing opponents pain in their fights. Highly vulnerable when her clothes are completely ripped in battle.