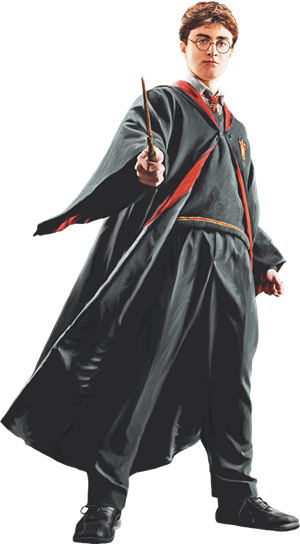 Harry James Potter is the title character of J. K. Rowling's Harry Potter series. The majority of the books' plot covers seven years in the life of the orphan Potter, who, on his eleventh birthday, learns he is a wizard. Thus, he attends Hogwarts School of Witchcraft and Wizardry to practice magic under the guidance of the kindly headmaster Albus Dumbledore and other school professors. Harry also discovers that he is already famous throughout the novel's magical community and that his fate is tied with that of Lord Voldemort, the internationally feared Dark Wizard and murderer of his parents Lily and James.

Tier: 9-B physically, higher with Sword of Gryffindor. At least 9-A, likely 8-C with magic

Name: Harry James Potter, also known as "The Boy Who Lived", or "The Chosen One"

Attack Potency: Wall level physically (Managed to deflect a bludger when he was 11 years old), higher with the Sword of Gryffindor (Killed The Basilisk). At least Small Building level (Hogwarts students learned the Freezing Spell in their third-year), likely Building level with magic (Comparable to Hermione Granger, Luna Lovegood, and Ginny Weasley; and they were able to match Bellatrix Lestrange together)

Speed: Athletic Human with Subsonic reactions (Capable of maneuvering with his broomstick in the seeker position of Quidditch, which requires to dodge the Quaffle while trying to catch the Snitch. Both of them moving as fast as broomsticks like a Firebolt. Dodged multiple curses by Voldemort and Death Eaters)

Lifting Strength: Athletic Human (Should be comparable to Oliver Wood. Supported Ginny Weasley and his own weight). Class 5 with spells (Comparable to Ron Weasley. Levitated a motorcycle side-car)

Durability: Wall level physically (Survived a 200-metre fall from a bike going at 150 miles per hour. Survived being smashed through a wall of bricks by Nagini. Tanked a hit from the Hungarian Horntail's tail, which could break rock), Large Building level with magical shielding (Used multiple Shield Charms to block spells from Voldemort to protect the defenders of Hogwarts). higher with other spells

Stamina: Fairly high (Possesses great willpower and will continue to persevere even when in intense pain or when hope seems lost. His willpower has helped him on several occasions.)

Intelligence: Gifted. Is an incredibly skilled wizard, only surpassed in his magical intellect by few such as Hermione. He was even credited by Hermione for being a great wizard in only his first year. Planned many things in the war with Voldemort and was successfully able to destroy the vast majority of his horcruxes before Voldemort realised what was going on. As a testament to his incredibly high levels of skill, his ability to learn complex spells is absolutely prodigal, being able to produce a full Patronus at the end of his third year, when much older Wizards had to take great effort to even produce a shield Patronus. He also taught a large group of Hogwarts students a large assortment of spells, including the latter mentioned Patronus charm. Ultimately, he would be responsible for Voldemort's downfall, despite being greatly outmatched by him in actual strength.

Weaknesses: Gets pains in his head when near Voldemort due to him being a Horcrux (Albeit this was averted when Voldemort died), needs glasses to see clearly, has terrible eyesight without them.