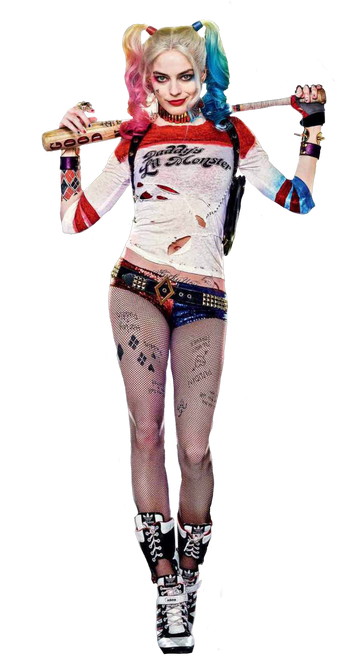 Dr. Harleen Frances Quinzel, also known as Harley Quinn, is a former psychiatrist and lover of The Joker. She is also a long-time nemesis of Batman and even assisted The Joker in the murder of the latter's protegee, Robin/Jason Todd.

Formerly known as Harleen Quinzel, Harley Quinn originally worked as a psychiatrist at Arkham Asylum. When the Joker was imprisoned there by Batman, the young psychiatrist took a particular interest in him, regularly visiting and speaking with him. Their frequent visits led to Harleen being gradually psychologically sabotaged and manipulated by the psychopath, eventually falling in love with him, and even going as far as smuggling in and giving the Joker a machine gun, per his request. Shortly thereafter, the Joker's goons infiltrated Arkham Asylum, and successfully broke their boss out. Before leaving, however, the Joker sadistically subjected Harleen to shock therapy, which had a severe impact on her mental state.

Taken to ACE Chemicals, Harleen was told by the Joker to say an oath, in which she was to swear that she would die and live for him. She responded in the affirmative, and willingly dove into the vat of chemicals below them, tainting her skin white and further degrading her mind as a result. From that point on, the Joker dubbed her "Harley Quinn" (giving her a red-and-black Harlequin costume), and the duo of psychopathic lovers proceeded to go on numerous crime sprees in Gotham City together, becoming the criminal king and queen of the city.

Attack Potency: Unknown physically. Street level with her baseball bat, mallet and gun (Able to quickly kill the Eyes of the Adversary, who can tank headshots from machine guns)

Speed: Unknown, with Subsonic reactions and combat speed (Can blitz people before they're able to react. Is able to do this and has dodged an attack by Incubus)

Intelligence: Likely Gifted. Became a psychiatrist of Arkham Asylum at a very young age, and has been The Joker's right-hand woman in crime for over a decade, conspiring with him to devise numerous elaborate schemes (Including the murder of Robin), and proving herself to overall be an expert tactician. However, her sanity has been eroded away due to years of serving by The Joker's side, and as a result she lacks mental maturity to a great degree, often acting in an impulsive and reckless manner.

Weaknesses: Completely insane and delusional, having little to no sense of self-preservation, often making careless, irrational, and impulsive decisions as a result. Is obsessively in love with The Joker to a near crippling degree. Possesses an obliviousness to danger that makes her invulnerable to fear and intimidation, often putting her in life-threatening situations as a result. 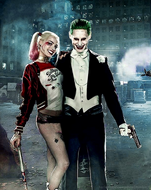 The King and Queen of Gotham City