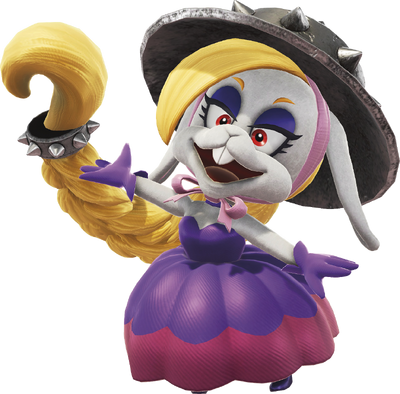 Hariet is the second Broodal fought in Super Mario Odyssey. She is the only female Broodal. Although it is not confirmed, she seems to be the second-in-command of the 4 main Broodals, due to being fought right before Topper in Bowser's kingdom.

Stamina: Quite high, as she can fight Mario without seeming to exhaust.

Standard Equipment: Her metal helmet, her many bombs.

Intelligence: Quite high, as she helped plan Bowser's wedding

Weaknesses: Her bombs, especially the ones on her hair, can be reflected and shot back at her. May panic when she loses her hat.

Bombs: Hariet is quite skilled with bombs, which, hers have spikes and leave a pool of fire where they explode.

Helmet: Harriet can fly in her helmet like a cyclone, dropping bombs down, however, if she is hit with one, she will fall out.