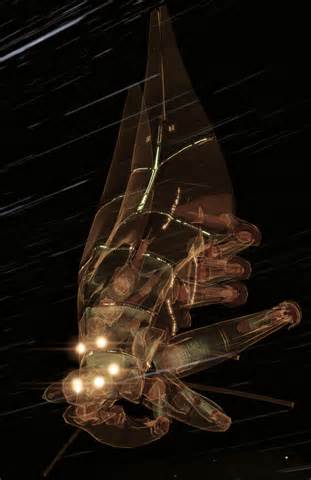 Harbinger is a Reaper who resides in dark space with the rest of the Reaper fleet. It is the overseer of the Collectors' operations, frequently possessing individual Collectors to fight battles personally. Harbinger's involvement first began two months after the Battle of the Citadel, when it made a deal with the Shadow Broker to gain possession of Commander Shepard's body following the destruction of the SSV Normandy. This did not succeed, however, and Shepard would go on to be resurrected by the Lazarus Project while Harbinger advanced its sinister plans for the galaxy.

Age: Over a billion years old

Powers and Abilities: Superhuman Physical Characteristics, Expert Marksman (Thanks to targeting computers and correctors), Kinetic Barriers, Mass Manipulation (Can increase/decrease/fluctuate the mass of a given volume of space via mass effect fields), Mind Manipulation (In the form of Indoctrination), Possession (Able to possess those imbued with or modified by Reaper technology [only shown to work on Collectors, likely able to do as Sovereign did and possess those with Reaper implants like Saren Arterius]), Energy Blast, Flight and levitation

Attack Potency: At least Large Town level (The main gun on a Reaper capital ship, like Harbinger, is estimated of being capable of delivering a payload of between 132 to 454 kilotons by the codex) likely at least Small City level (Reaper gunships on earth are noted to be capable of harnessing this kind of firepower by the codex. This suggests the previous estimate is likely not a full measure of a Reaper capital ship's firepower)

Speed: Massively FTL+ Flight Speed (Can travel 30 light-years in a day, faster under Mass Relay influence), FTL+ (The Human-Reaper [per the Reaper Brain war asset is capable of "crunching unheard amounts of data in nanoseconds", Harbinger should be at least capable of the same as he is much more superior), Likely Relativistic+ attack speed (A Reaper's main gun accelerates their composite molten iron-uranium-tungston projectile to a significant fraction of lightspeed per the codex); At least Massively Hypersonic as Harbinger's movement speed should be far greater than Commander Shepard, who is only a human and much smaller in size)

Standard Equipment: Element Zero drive core, its main and extremity guns, Kinetic Barriers, targeting computers and correctors, a missile defense system that is similar to that of a GARDIAN laser defense grid.

Intelligence: Super Genius, Harbinger was the first Reaper and was the one that betrayed his creators and succeeding in nearly killing them all, as well as coordinating the Collectors movements. Knows all previous cycles which spans millennia.

Weaknesses: Kinetic barriers are activated based on the speed of an attack. A melee attack is not fast enough to set it off. Also, the shielding afforded by kinetic barriers does not protect against extremes of temperature, toxins, or radiation; When on any surface of significant gravity, any capital ship has to direct energy towards its Kinetic Barriers because of having to lower its mass in a higher gravity environment.

Indoctrination: Indoctrination is an attempt at controlling the opponents' mind. It happens just by being near a Reaper or a Reaper artefact whether it's dead or not. The opponent begins to go insane and eventually is convinced that the Reapers should be obeyed. Strong willed people can resist the effects but eventually will be turned over time.