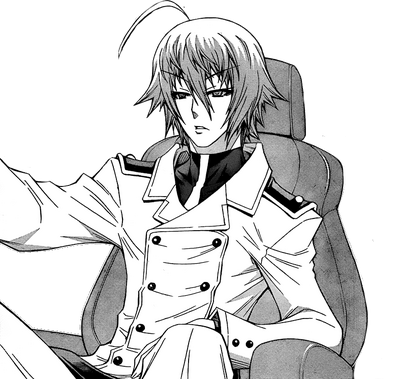 Hanten Shiranui is a transfer student at Hakoniwa Academy. He is the Partner of Ajimu Najimi and her double. As his Epithet "The Non-Human Who is Just There" implies, he usually remains innactive and concealed, only supporting Ajimu from the back ground. He only becomes active upon the death of his partner at the hands of Shiranui Iihiko, where he attemps to carry out Ajimu's will after her supposed demise.

Name: Hanten Shiranui, The Non-Human Who is Just There, Hanten'in

Powers and Abilities: Superhuman Physical Characteristics, Power Creation, Power Bestowal, Resistance to Sealing (He was apparently sealed by Kumagawa along with Ajimu, but is unsealed by the time they arrive), Likely Immortality (Type 1), Plot Nullification, Fate Nullification, Life Creation (created the Shiranui family as "Backups"), Time Stop, Photon Manipulation, Space Displacement, and probably any other power that he wants

Weaknesses: He cannot create self-contradictory skills. Someone with too many skills may turn the plot against them, due to them being more like a final boss than a hero. Likely cannot create styles.

Feats: Created around 100 of the skills in Ajimu's arsenal

Superhuman Physiology: Just like all Not-Equals, Hanten Shiranui has enhanced physical abilities. He is comparable to Ajimu.

Skill Creation: To become more comparable to Ajimu, Hanten developed his "Skill that makes Skills." He can make any power that he desires, and grant them as he pleases. An example of the skills that he has created:

Note: Due to the uncertainty regarding Hanten's tiering, the nature of his abilities, and his portrayal within canon, he should not be used in versus threads.