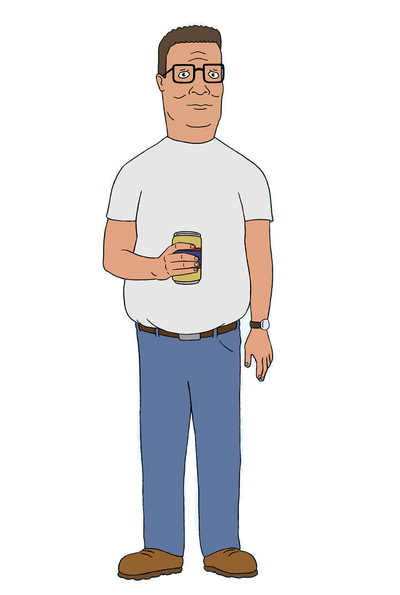 Hank Hill is a man who lives in Arlen, Texas, with his wife Peggy Hill, and son Bobby Hill. Hank is a very proud, honest, and hardworking guy who wants the best for his family. He does his best to provide propane and propane accessories at his job at Strickland Propane and raise his son Bobby to be just as good of a worker as he is. He, while having a healthy relationship with his family and friends, can get into confrontation with them or others thanks to his overprotective nature, extreme pride, and sometimes issues with his temper. However, even when facing these issues, he tries to do what's best for people and what he believes to be right.

Origin: King of The Hill

Attack Potency: At least Wall level (Can destroy barrels with a kick, can rip apart walls with grip strength alone. Once broke open Bobby's locked door. With one arm, can casually wrestle and ragdoll Dale, Boomhauer, and even Bill Dauterive who was in the military and was able to overpower 6 to 8 football players trying to tackle and bring him down while on an injured leg. Stronger than Peggy, who could fight with Luanne's mother, who bruised Bill's arm with a single hit. Kicked a hole in a fence. With friends, had managed tore apart a large house. Can easily ragdoll Bill whose sheer weight was causing a tree to severally bend, and who was physically strong enough to stop a large amount of furniture shooting at him while in a full speed Semi-Truck), likely Small Building level (Can fight and overpower people who can hurt him, was able to hold himself away from gale force winds and a A Level 5 Tornado, that was also strong enough to lift, throw, and destroy trailers, houses and cars. Can harm himself)

Speed: Superhuman (Outran a car, and also outran several raging bulls while his body was suffering from an effect that was severally weakening his body. Was a good football player and still is shown to be rather fit. Superior to Bill who was in the military. Should be comparable to the CPS man who reacted and dodged a baseball tossed at him, Was able to make sharp quick turns while driving a semi truck rolling downhill on icey thin roads backwards. Faster than Bill who could temporarily outrun a Rottweiler) with Subsonic reactions (Reacted to high-speed sports cars), up to Supersonic+ attack speed with weapons

Lifting Strength: Class 5 (Can casually lift and ragdoll multiple people with one arm, Much stronger than Joseph who lifted a couch by himself, Superior to Bill who was able to move with 6 to 8 football players on him and who could keep several pieces of furniture from falling out of a moving Semitruck), Possibly Class 10 (Physically held himself away from a level 5 tornado)

Durability: At least Wall level (Can tank hits from Bill and took 6 to 8 football players trying to tackle while having an injured knee, superior to Dale who took several hundreds to thousands ants and was unhurt after jumping out of a bus and then being hit by a car, biting him at once, and Peggy who survived a fall from a plane, comparable to his attack potency), likely Small Building level (Survived a bomb that blew up large part of Megalomart, and should be superior to Luanne who was in the same explosion. He should also be comparable to his attack potency)

Stamina: Very high (Generally shown to be very fit. Was able to build a complicated grill for several days in a row without signs of fatigue, Far superior to Bobby who ate a 72 ounce steak in under an hour)

Intelligence: Gifted (Is shown to be a generally smart person, especially when it comes to mechanics and propane. With the help of Kahn, was able to build a robotic grill with mechanical arms, remote control, and other parts, has shown to be comparable and likely superior to Kahn who is an extremely bright person able to build robots, run businesses, and attended a higher end college, smarter than Connie, who spends a lot of her time on studies, is an above average student, and her intelligence helped her get into a very good college, Is a skilled guitarist and exterminator, Good at playing baseball and golf, comparable to Bobby who won first at a state competition about meat against several other teams by himself, and apparently knows how to start a mans heart up again with a downed power line)

Weaknesses: Despite contrary belief, Hank does a decently good control on his anger, though enough nonsense can put in into a state of rage, has DGS.

Peter Griffin (Family Guy) Peter's Profile (Speed was equalized, Both were 9-A)

Frank West (Dead Rising) Frank’s Profile (Speed was equal, Both were 9-A, Frank has his suit and the natural abilities it comes with and a Baseball bat, 9 Iron, and metal pipe, Hank had only melee weapons, Took place in a mall)

David Hasselhoff (Spongebob Squarepants) David’s Profile (Both were 9-A, Speed was equal)

Big Smoke (Grand Theft Auto) Big Smoke’s Profile (Both were 9-B, Smoke is fully equipped, Hank had pistols, a shotgun, and a rifle, Speed was equal, Both were bloodlusted, Both started 30 meters away, Fight was in Wal-Mart)

Saitama (One-Punch Man) Saitama’s Profile (Speed was equal, Both were 9-A, Both has arsenal restricted, Took place on Hanks Lawn)

Two-Toed Tom (Mythology) Two-Toed Tom's Profile (Hank had a day of preparation, and speed was equalized)